Maryland ranks 7th in the conference for athletes' academic achievements.

The Atlantic Coast Conference released its annual honor roll for student athletes today, and it features 192 Terrapins. The list celebrates student athletes who played a Division 1 sport while posting a GPA of at least 3.0. That’s a lower threshold then the 3.5 us non-athletic folk have to get to qualify for Dean’s List, but without daily practices and trips to the weight room I for one am not complaining.

The list has 2909 athletes in total from the 12 schools in the ACC. That’s more than last year’s mark of 2904. In fact, the total amount of student-scholars has risen every year, largely due to conference expansion.

Maryland’s 192 honor roll student athletes put it in seventh place in the conference. The top 3 spots on the podium go to Duke, with 474 students on the list, Boston College with 391, and University of North Carolina with 329.

The total of 192 reflects a significant drop for Maryland compared to last year. In the 2011-2012 school year 259 student athletes made the honor roll. This is largely a reflection of the cut athletic teams however, as no swimmers, tumblers or water polo players, among others, qualified for the list this year. Had Maryland maintained the same amount of student athletes on the list this year, they would have ranked firmly in the top half of the conference in fifth place.

The Golf team’s Christopher Miller is receiving the honor for the fifth time, the most of any Maryland athlete. Another 18 athletes are receiving the award for the fourth time.

Lacrosse leads all sports with 31 athletes on the list. The lowest two totals are the tennis team, with three students making the cut, and the combined basketball teams, with seven players. Logan Aranholt was the only starter on the men’s team to make the ACC honor roll. The chart below shows the breakdown of all the students that made it by sport. Congratulations to all of the Terrapins who performed as well in the classroom as they do on the field. 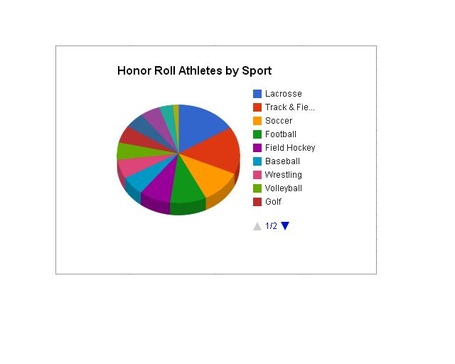