Profiles in Terpage - A Countdown to the Football Season: Levern Jacobs

Our series continues with a wide receiver expected to contribute this year.

Share All sharing options for: Profiles in Terpage - A Countdown to the Football Season: Levern Jacobs 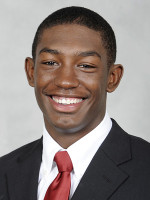 Levern Jacobs was a mildly-hyped, three-star prospect coming out of Suitland, where he was a big-time receiver as well as being a member of the baseball and track teams. He accepted a scholarship offer to Marshall, but went to the Milford Academy in New York to prep for a season first.

While at Milford, he was offered a scholarship by Randy Edsall, which he accepted nearly immediately. He enrolled that spring, went through spring practice with the team, and put himself in a good position to play right away as a Terp.

That's exactly what he did, catching seven passes for 50 yards as a true freshman, and setting himself up for a spot within the receiving rotation this year.

Jacobs is listed as Stefon Diggs's back-up at slot on the two-deep, but could see a good amount of time on the outside. With Deon Long and Amba Etta hurt through summer camp, he took snaps outside and could be utilized at any of the three wide receiving positions. Jacobs likely figures as Maryland's number five receiver, behind Diggs, Long, Nigel King and Etta, and should get a good amount of targets this season.

Our next player is good friends with a star NBA point guard.

HughGR gets on the board.