Profiles in Terpage - A Countdown to the Football Season: Daniel Adams

Our series continues with a transfer from New Mexico.

Share All sharing options for: Profiles in Terpage - A Countdown to the Football Season: Daniel Adams 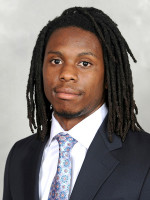 None that we could find.

Adams transferred from Northwestern to Dunbar his senior year, but moved back after three games. A three-star prospect, he committed to Mike Locksley's New Mexico program over offers from Illinois, Marshall, Temple, Virginia and West Virginia.

As a Lobo, he played in the first two games of the season before injuries ended his season. He then transferred to Maryland, sitting out last year as a NCAA requirement.

Maryland is pretty jam-packed at wide receiver, and Adams appears to be on the outside looking in. He didn't make the two-deep, and has primarily been practicing with the third team - an inauspicious sign for his playing time hopes. Expect to see Adams on special teams, if anywhere, for the time being. He could play next year or the year after, as the receiving corps begins to thin out, but Maryland is more than set at the position.

Our next player is the older brother of another Terp.

Cyfi98 gets on the board.