Profiles in Terpage - A Countdown to the Football Season: Amba Etta

Our series continues with a redshirt freshman wide receiver.

Share All sharing options for: Profiles in Terpage - A Countdown to the Football Season: Amba Etta 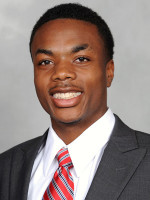 Etta, who went by Etta-Tawo last year, was born in Muscat, Oman before moving to Georgia, where he starred as a wide receiver and sprinter at McEachern. After his senior season, he was named second team All-State at wideout, and was on the 4x400 relay team that finished second in states.

Etta's speed is one of his biggest attributes, with a 40 time of 4.4 seconds, which resulted in him receiving offers from schools including Illinois, Purdue and South Florida.

Being named the scout team offensive player of the week for the William & Mary (9/1) and West Virginia (9/22) games.

Seeing some time on the field, but not due to injury.

Etta is behind Deon Long on the depth chart at one of the two outside receiving positions for the Terps, with Nigel King at the other and Stefon Diggs in the slot. Etta redshirted last season, but being the fastest receiver on the team should mean that he'll see some time on the field this year. With Long's injury in the early part of the season, Etta has seen some time in practice with the 1st team offense, so they clearly have confidence in him. But hopefully he's seeing time on the field not as a result of injury to one of Maryland's best receivers.

Our next player has a name similar to one of Jimmy Buffett's most famous songs.