Profiles in Terpage - A Countdown to the Football Season: Malcolm Culmer

Our series continues with a redshit freshman wide receiver

Share All sharing options for: Profiles in Terpage - A Countdown to the Football Season: Malcolm Culmer 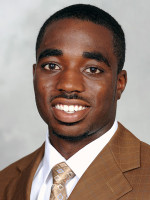 Culmer was a multi-sport athlete at Willingboro High school, playing not only football, but basketball and track as well. Originally from Atlanta, he moved to NJ and became a three year starter at wide receiver, while also playing cornerback. He was recruited by Illinois and UMass, but chose the Terps, telling the Sun's Matt Bracken "I felt like I committed for a reason. [Maryland is] the college I was supposed to go to."

Malcolm "In the Middle" Culmer

Being named the scout team offensive player of the week before the BC game.

Seeing some time on the field, but not due to injury.

Culmer is behind Nigel King on the depth chart at one of the two outside receiving positions for the Terps, with Deon Long at the other and Stefon Diggs in the slot. Culmer redshirted last season and this year Will Likely be a bit buried among what is one of the ACC's most talented wide receiving corps. He could see some playing time, but as long as King, Long and Diggs stay healthy, he probably won't see too much time on the field this season.

Our next player was born in the capital of Oman.