Profiles in Terpage - A Countdown to the Football Season: Deon Long

Our series continues with an incomer expected to be a star contributor.

Share All sharing options for: Profiles in Terpage - A Countdown to the Football Season: Deon Long 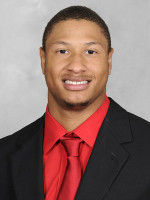 The short answer? The long way.

Long was a highly recruited prospect coming out of Dunbar, earning second-team All-Met and All-DCIAA honors, and went to Hargrave Military Academy before heading to West Virginia. After struggling with head coach Bill Stewart, Long transferred to Mike Locksley's New Mexico program. He sat out a year there due to NCAA rules, and as a freshman in 2011, he led the team with 47 receptions, 809 yards and four touchdowns.

After that, Long transferred to Iowa Western Community College, where he starred, setting national JuCo records and winning a national championship. He chose Maryland over scholarship offers from Florida, Illinois and Nebraska.

Long is the starter at the X position, one of two outside receiving positions for the Terps. The other belongs to Nigel King, with Stefon Diggs in the slot.

Long is in the rare position of a newcomer who is expected to be one of the stars of the team. He is perhaps the fastest player on the Terps, and certainly has the most experience of any offensive player (and the only player on either side of the ball with a national championship). His speed should work well with King's strength and Diggs's elusiveness, but perhaps the most surprising element of Long's game is his size. At 22, he is very old for a college junior, and has had time to bulk up to a pro level. That should shine through this year, as Long will be a star on deep balls and medium routes.

Our next player shares his first name with the titular character of an old TV series that starred an actor who is now the star of a television show that is about to end.

Scaletta gets on the podium.