Profiles in Terpage - A Countdown to the Football Season: DeAndre Lane

Our series continues with another true freshman wide receiver.

Share All sharing options for: Profiles in Terpage - A Countdown to the Football Season: DeAndre Lane 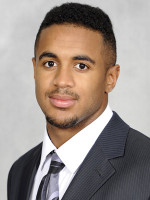 You can see his senior statistics above, but DeAndre Lane's junior campaign was even more impressive - 228 carries for 1,728 yards and 21 touchdowns. That was good enough for him to be named second team All-Met by the Sun and second-team Big School All-State.

After his senior year, the accolades continued to pile up. He played in the Crab Bowl and the Big 33 Football Classic, and was named first-team all-county as both a running back and defensive back, second team all-met as a defensive back, and third-team Big School All-State.

Lane received interest from North Carolina State, Wake Forest and West Virginia, but Maryland was his only offer.

He also ran track in high school, winning the 4A North Region 100-meter dash with a time of 11.03 seconds, and running a 4.38 40-yard dash. He left Catonsville as their all-time leading scorer, and was an all-academic selection.

"Fast Lane". His real nickname is "Speedboy", but I was proud of that one.

Getting reps as a reserve slot receiver and returner.

Lane has been one of the more impressive true freshmen in camp so far, bursting onto the scene as a slot receiver with good hands and great speed. That's probably the most surprising thing about Lane - as a former running back, you knew he would bring speed to the table, but he has not dropped many balls so far in camp.

Lane is currently fourth on the depth chart at slot, behind starter Stefon Diggs and reserves Levern Jacobs and Regis Whittington. The coaches have announced they have started to give Jacobs reps on the outside - presumably because Lane has played so well in camp they are comfortable with him being Diggs's back-up.

The coaches are also comfortable with Lane being the return man - Diggs, Will Likely and Lane are the three taking return reps in practice. He's one of the true freshmen with the best chance of playing this year, and he's got a good shot of making some big plays on the field.

As an aside, here's a great profile on him by Prewitt.

Our next player is older than I am.

brianblack gets on the board.