Profiles in Terpage - A Countdown to the Football Season: Taivon Jacobs

Our series continues with a star true freshman wideout.

Share All sharing options for: Profiles in Terpage - A Countdown to the Football Season: Taivon Jacobs 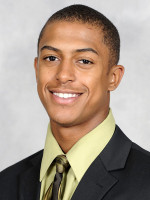 Jacobs originally committed to Ohio State, and wa sa signing day surprise for the Terps. He re-opened his commitment the day before, and made his decision in large part to stay close to his young daughter, Bailey. His older brother, Levern, is a wide receiver at Maryland, which played a factor in his decision as well.

He had offers from Florida State, Miami, Michigan State, Nebraska, North Carolina, Notre Dame, and Ohio State, among others.

Jacobs fully recovers from his injury and becomes the immediate back-up to Nigel King, giving the Terrapins a sixth option at wide receiver.

Jacobs has incredible top speed and is very shifty in the field - remind you of anyone? He's still recovering from a torn ACL suffered back in December at Crab Bowl practice, but is expected to make his camp debut soon.

Jacobs is behind starter Nigel King, Malcolm Culmer, Tyrek Cheeseboro, and Tejiri Erhie at one of the two outside receiver positions. It is pretty easily the receiving position with the straightest upwards path, and it will be interesting to see if the coaches decide to redshirt him, with the exceptional depth Maryland has at receiver this year.

Jacobs is also one of many options in the return game for Maryland - joining Stefon Diggs, Deon Long, DeAndre Lane and Will Likely.

Our next player shares his last name (and amount of syllables in his first name) with a former truck of a fullback for a former Big 12 team now in the SEC.