Profiles in Terpage - A Countdown to the Football Season: Dave Stinebaugh

Share All sharing options for: Profiles in Terpage - A Countdown to the Football Season: Dave Stinebaugh 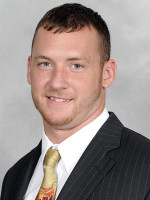 Dave Stinebaugh was your typical do-everything star in high school, playing tight end, wide receiver, free safety, linebacker, punter, and kicker for Perry Hall, even rushing and passing for touchdowns in his junior season. The Gators went 9-3 in his senior season, finishing as runners-up in the 4A North Region. He was named All-Baltimore and all-county as well as all-state following his senior year, and was the Baltimore County player of the year as a junior. At Perry Hall, he also played basketball and lacrosse.

Stinebaugh was recruited to Maryland by James Franklin, and chose the Terps over an offer from Akron. He also received interest from Michigan State, Connecticut, and Rutgers, among others. He grew up rooting for the Terps, and had developed a good relationship with the coaches.

After redshirting his first year, he played well in spring practice before 2010 and entered the year with promise at the tight end spot. He played in the first five games, starting in one, before knee and shoulder injuries forced him to miss the rest of the year. He caught four passes for 42 yards in those first five games.

Stinebaugh missed all of 2011, and returned to the field last year, playing in eleven games as a reserve to Matt Furstenburg and on special teams. He made three tackles on the year, and blocked a punt against North Carolina State.

The key for Dave Stinebaugh is to stay healthy. Prewitt called him a "walking game of 'Operation'" (that profile is a must-read), and if he manages to stay on the field this year, he will get a lot of play.

There's no real competition for his job - as we've said earlier today, the real questions go on below him on the depth chart, seeing who is going to take over. There's been a lot of talk (and rightly so) about Maryland's talent at wide receiver, and that's going to help open up some room for Stinebaugh on shorter routes. A tight end can be a quarterback's best friend, and while it's unlikely that he'll ever lead the team in targets, Stinebaugh will be called upon in key situations this year.

Next up are the walk-on wide receivers. Name them.