Profiles in Terpage - A Countdown to the Football Season: P.J. Gallo

Share All sharing options for: Profiles in Terpage - A Countdown to the Football Season: P.J. Gallo 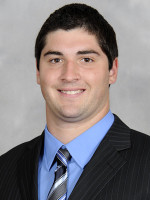 P.J. Gallo was a star defensive end who happened to play tight end in high school - over his last two years of high school ball, Gallo had over 230 tackles and only 26 receptions, but it was enough to earn him Suburban One first-team honors at tight end in 2011. Gallo was also named first team all-state and to the Mini Maxwell Award team that year, awarded to players in the Greater Philadelphia/South Jersey region who "exhibit excellent academics, outstanding football performance and a strong commitment to community service".

Gallo was offered by a host of other schools, including North Carolina, NC State, Pittsburgh and West Virginia. He committed to Maryland in early July of 2011.

Last year, he redshirted, and won four separate scout team player of the week awards - three on special teams, one on offense.

"Pasquale". We're going to do a little reversal here, seeing as Pasquale is his real name and P.J. is his nickname.

Making the two deep this year.

Cementing his spot as the starting tight end next year.

Gallo stands as the number two tight end on Maryland's depth chart, behind senior Dave Stinebaugh. Tight ends coach John Dunn has expressed concern about the future of the position - and rightly so. The Terps have five freshmen behind Stinebaugh, and while there's certainly talent, there isn't one you can point to and say "that's the tight end of the future."

Gallo and true freshman Andrew Isaacs are the two closest to that. Isaacs has the advantage of the four-star label, but Gallo has looked solid in camp so far and will almost certainly get the most game snaps of any of the freshmen this year. Maryland's system doesn't call for too many two tight end sets, but Gallo is a good pass catcher with blocking ability who can make an impact.