Profiles in Terpage - A Countdown to the Football Season: Brian McMahon

Our series continues with a walk-on tight end who could see playing time.

Share All sharing options for: Profiles in Terpage - A Countdown to the Football Season: Brian McMahon 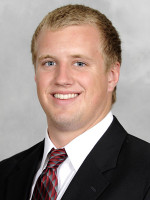 McMahon was an ultra-talented dual-threat quarterback at Atholton, being named first-team All-Howard County and Baltimore All-Met after leading the Raiders to an 11-1 record in his senior year. He captained both the football team and basketball team in his junior and senior years, and was recruited by a boatload of Ivy League schools. He ended up choosing a preferred walk-on spot with Maryland over his second choice - Johns Hopkins.

Last year, McMahon redshirted, with a bit of drama thrown in. Thanks to all the injuries, McMahon was actually Shawn Petty's back-up at quarterback.

McMahon stands as the third tight end on the most recent depth chart, behind starter Dave Stinebaugh and fellow redshirt freshman P.J. Gallo. Behind McMahon are a trio of true freshmen - Andrew Isaacs, Derrick Hayward and Eric Roca.

Tight end is a position that's pretty set for Maryland this year but is entirely up in the air for the future. Stinebaugh is the established starter, with Gallo and McMahon pretty firmly entrenched as their backups. Stinebaugh, however, is a senior, and none of the other guys have played in a game yet. The non-Stinebaugh tight ends will be a spot needed to keep an eye on for the future - Gallo's the favorite, but McMahon, Isaacs, and Hayward could all make a serious run at the job.

Our next player shares my first two initials.