As we continue our series remembering our favorite ACC memories, Dave looks back on a special weekend in Greensboro in 2004, when Maryland beat the #3, #2, and #1 seeds to capture their first ACC Tournament title since 1984, while also snapping Duke's five year run as conference champs.

The entire weekend was surreal. Maryland wasn't supposed to be playing on Sunday against Duke in the ACC Tournament Finals. Just two years removed from their first National title, the Terps were squarely on the bubble at the start of that weekend in Greensboro. I don't think anyone expected Maryland to be driving back to College Park on Sunday with their third conference tournament title in tow; but that's what made this weekend so memorable.

2004 was the last year of the ACC we all knew and loved. It marked the last season of the round-robin schedule, when each team played each other twice in conference play, and the last year of the 9-team conference tournament. The Terps had finished the season 7-9 in ACC play, a somewhat disappointing campaign after Gary Williams had brought in two highly touted recruiting classes following the Natty in 2002.

Maryland was the six seed and had to face the three seed and #15 ranked Wake Forest Demon Deacons in their first game on Friday. I remember arriving in Greensboro with Maryland's pep band and thinking about how difficult it was going to be to defeat Wake. Chris Paul was a stud, Justin Gray and Eric Williams were both having great years, and Maryland has lost both of their games against Wake earlier in the season. Maryland could definitely win, but in a season that saw a lot of disappointing losses, you knew that this had the potential to be a heartbreaking game. But after 17 lead changes, John Gilchrist hit a pair of free-throws with just over three seconds left to seal the one point, 87-86 victory over Wake. Next up - NC State.

Everyone was still buzzing about Friday night's win over Wake as Maryland was getting set to tip off against the two-seeded Wolfpack. But that buzz would quickly turn to shock by the close of the first half. During the first part of the half, the score stayed close, with the Terps trailing by one after Chris McCray made a pair of free-throws just before the 12 minute television timeout. But things would quickly take a turn for the worst for Maryland as State went on a 16-4 run over the next five minutes. Each time it appeared that the Terps would go on a run of their own, State responded by not only scoring, but by playing great defense against Maryland, holding the Terps to just seven points over that last eight minutes of the half. As the first half buzzer sounded, moments after Chris McCray slammed home an angry, frustrated dunk, Gary Williams and his team were facing a 19 point deficit. It looked like our trip to Greensboro would be ending after another agonizing 20 minutes of basketball. But John Gilchrist had other ideas.

Maryland started out the 2nd half on a 7-0 run, with five of those points scored by Gilchrist. Maryland now trailed by 12, but at least they weren't giving up, right? Maryland continued to make baskets, answering any shot NC State made with a shot of their own, slowly chipping away at State's lead. With just under 15 minutes remaining, Maryland had trimmed State's lead down to 10. So you're saying there's a chance...

Over the next 15 minutes, we watched in amazement as Maryland continued to make baskets at a rate that seemed impossible just thirty minutes earlier. Maryland went on another big run and with 13:33 remaining, State had to call a timeout, their lead down to just two, as the crowd at the Greensboro Coliseum erupted in cheers for the now on fire Terrapins. When Maryland captured their first lead of the game with 8:50 remaining, it was just one of those moments where you look around and have to ask if you're dreaming. But the game wasn't over and State, despite blowing their lead, was still fighting.

The lead went back and forth over the last 10 minutes of the game, but you just had this feeling that Maryland was playing carefree and having fun, while State was nervous and fearful. Maryland had the ball, up two, with 25 seconds left. State fouled Chris McCray, who went to the line. Swish. Swish. Terps up four. State misses two shots and has to foul again. Nic Caner-Medley goes to the line. Swish. Swish. Julious Hodge slams home a dunk of frustration, but it didn't matter. Maryland was moving on to Sunday, having overcome the largest deficit in ACC Tournament history. But the hated Blue Devils, who had won five straight ACC Tournaments, awaited.

Maryland had lost both of their matchups with Duke in the regular season, including a blow out loss at Cameron Indoor, that concluded with the Crazies chanting "Not our rival!" as the final seconds of the game ticked off the clock. So I was a little worried about this game. But this was an opportunity to not only beat Duke, but beat them on their turf, in front of their fans, and end their streak of conference tournament victories. That's what made the win so satisfying.

Maryland started the game where they left off against NC State, running out to an early 11-4 lead. By the midway point of the half, the Terps had built an 11 point lead on the #1 seed Blue Devils. But you knew against Duke, no lead was safe until that final buzzer sounded. We were quickly reminded of that fact as Duke chipped away at Maryland's lead and the teams entered halftime with the Terps clinging to a two point lead.

The second half was a back and forth contest. You could tell Maryland was getting tired. The next thing you know, Duke is up by two. Then three. Then five. You could feel the game slipping away from Maryland. I looked up at the scoreboard and Duke is up by 12, 74-62, with just 3:25 remaining. Maryland should have put them away when Chris Duhon was dealing with an injured foot. Now he was back and it seemed like the Cinderella run for Maryland was coming to a close, against the hated Blue Devils, in Greensboro. Ugh.

But Maryland went on a quick 7-0 run, cutting the lead to five with 2:20 remaining. We can do this. Caner-Medley goes to the line. Makes the first. Down four. Misses the second. How can you miss a free throw at a time like this? The game continues. Jamar Smith, who struggled mightily from the line all season, has a chance to make two. Swish. Misses the second...and Mike Grinnon fouls, because yes, we had to put Mike Grinnon in the game as we were in so much foul trouble. Duhon makes the first but misses the second. We're down 4 with 43 seconds left. Come on guys, we need to score. Pass to Mike Jones in the corner, he shoots, BOOM! MIKE JONES (WHO?) nails the three! We're down one with 34 seconds left. Foul! Foul! Caner-Medley fouls Luol Deng. He makes both. Shit. We're down three with 28 seconds left. Gilchrist, who's been an absolute stud, drives to the basket - WHY ARE YOU DRIVING! WE'RE DOWN THREE! OH MY GOD! HE MADE IT AND Shelden Williams fouled him! Gilchrist goes to the line - swish. We. Are. Tied. Please don't let JJ make a three to win. Please don't let JJ make a three to win. CLANK! We're going to overtime.

The OT was more back and forth, but Maryland eventually pulled ahead. We just need to make our free throws. Oh my God. Mike Grinnion is still in the game? OH MY GOD THEY FOULED HIM AND HE HAS TO SHOOT FREE THROWS? I loved Mike Grinnon. He was one of my favorite players at Maryland. But I couldn't believe our ACC Tournament live rested on him make a pair of free throws. When he made both, Greensboro exploded with cheers and laughs. It was at that point I knew we were winning and a few moments later, we did, capping off my favorite ACC memory.

One of our readers, Bob Hickey, wrote in and shared these pictures from that tournament. I still can't find the pictures I took, so I was happy Bob was willing to share these with us. Thanks, Bob! 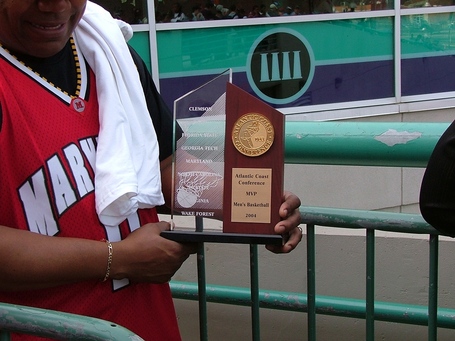 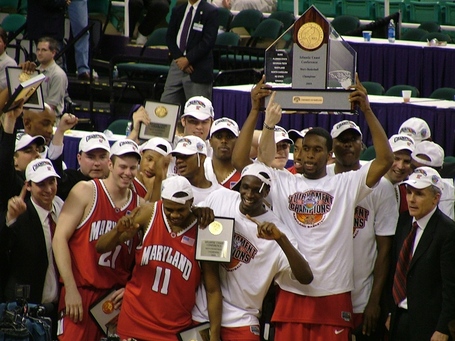 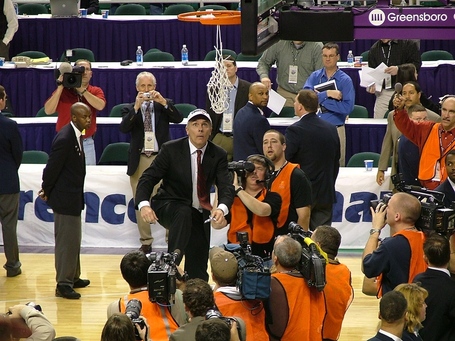 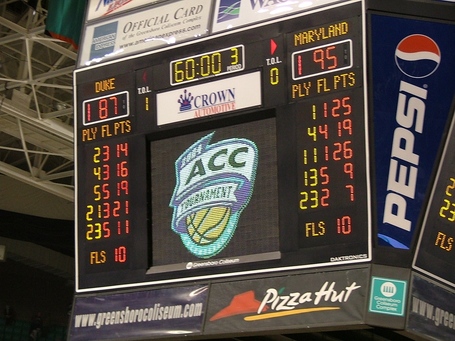