The Big Ten released its 2016 and 2017 football conference schedules this morning, the former of which will mark the start of the Big Ten schedule expanding from eight to nine games. Maryland now has its schedule for its first four seasons in the Big Ten, after the 2014 and 2015 schedules were announced in May and June.

Of note: the Terps will face Purdue, Northwestern, Nebraska and Minnesota for the first time in conference play in either '16 or '17, and will not play Illinois in any of their first four years.

With the move to a nine-game schedule, the East and West Divisions will alternate between playing five games at home with four on the road and four at home with five on the road each season. For example, 2016 gives the Terps five home games, while 2017 only brings four.

Maryland's 2017 schedule is very similar to it's 2015 one, with the Terps hosting East Division foes Michigan, Indiana and Penn State and traveling to Rutgers, Michigan State and Ohio State in both years, giving Terps fans plenty of marquee match-ups at home or to make a road trip to. 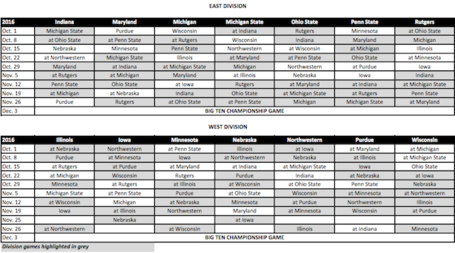 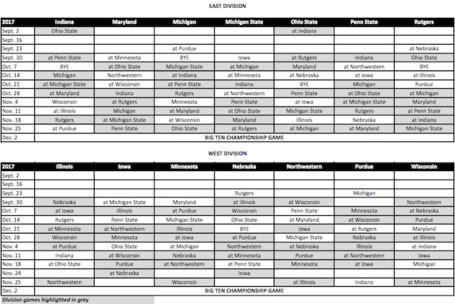