Maryland gets a tough draw in their second Big Ten campaign.

Not too long after the 2014 Big Ten football schedule was announced, the conference released its 2015 conference schedule Monday. The games will start in October, and Maryland will have a considerably tough run of the things.

The Terps will open on October 3 at home against Michigan, before travelling to Columbus to take on Ohio State the next week. After an open week (which will either be used as a bye or filled with a non-conference opponent), Maryland will square off against Penn State at M&T Bank Stadium in Baltimore, before non-division games at Iowa and at home against Wisconsin.

To round off the season, the Terps play three division games in a row - at Michigan State, in College Park against Indiana, and at Rutgers, who the conference wants to be Maryland's main rival.

Obviously, as this is a season two years away, it can be a little difficult to tell just how hard this schedule will be for Maryland, but road games against Ohio State and Michigan State are always difficult. Home contests against Michigan and Wisconsin should be a big draw, and the Terps' last two contests of the season should hopefully be their easiest in-conference.

The game at M&T Bank should be a huge event - the stadium has a considerably larger capacity than Byrd, and should help further solidify the program's reach in the Baltimore area (a win would certainly help as well).

Here's the entire conference schedule, via the Big Ten. 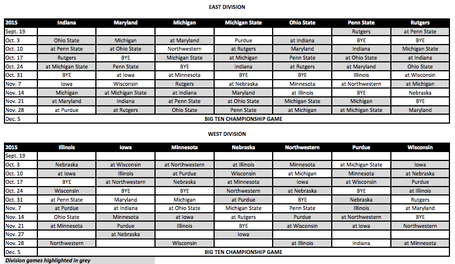