Profiles In Terpage - A Countdown to the Football Season: Jermaine Carter

Our series continues with another true freshman linebacker.

Share All sharing options for: Profiles In Terpage - A Countdown to the Football Season: Jermaine Carter

Today we cover one of the incoming Friendship Recruits. 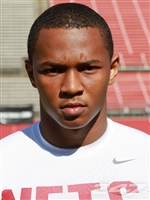 Carter started out at Archbishop Carroll, transferring over to Friendship Collegiate Academy before his senior year. At Friendship, Carter played MIKE in a 3-4 system, making him more accustomed to that kind of defense he'll be playing in College Park (there will be a position change involved, but more on that later.

There was no clear-runner up to Maryland in Carter's recruitment - it kind of seems like he committed to the Terps because he was afraid his spot would disappear - and he was brought in by Mike Locksley. Carter had offers from Boston College, Colorado, Syracuse, and Temple. His interest list is much more interesting, as he heard from Michigan State, Nebraska, Penn State, Tennessee and Wisconsin.

"Aquaman". Each of the Friendship group is going to be named after one of the Super Friends. Carter gets Aquaman. Don't question the methods.

Carter puts on weight, impresses in the squad team, and sets himself up to be involved in the WILL conversation two years down the line.

Like we mentioned earlier, Carter played MIKE in high school running a 3-4, but he is best suited for WILL at the collegiate level due to his speed. Regardless, he needs to bulk up, and that will likely be the focus of his first year on campus (if not his first two).

Similar to Jalen Brooks, Carter has a good amount of potential and raw skills, but is not quite at the size yet to contribute at the collegiate level on a consistent basis. He will be making the switch from the inside to the outside (hopefully), and like the rest of Maryland's considerable linebacking class, should be ready to make some noise in a few years and provide some serious competition.

Our next player's high school shares its name with a run-down dorm at Maryland that is being cleared (along with another one) to make way for a new SUPER DORM (I think).

Scaletta joins the pile-up at the bottom.