Profiles In Terpage - A Countdown to the Football Season: Derrick Hayward

Our series of profiles continues with another incoming linebacker.

Share All sharing options for: Profiles In Terpage - A Countdown to the Football Season: Derrick Hayward

Today we cover one of the incoming Friendship Recruits. 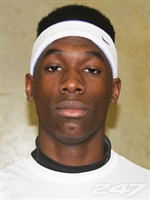 Hayward was an early commitment for Maryland, pledging to the Terps in May last year (he was the third member of the class). He says he's the first player from the Eastern Shore to play football at Maryland, and while that's impossible to check, he's certainly one of the only ones at the Division 1 level anywhere.

Hayward played defensive end, linebacker and tight end in high school, and was recruited to Maryland by John Dunn. Maryland was the first school to offer him a scholarship - followed by Boston College, Rutgers and Navy, but Michigan State and Georgia Tech both showed interest.

After his senior season, Hayward was named to the Maryland Small-School All-State Team and played on the Washington side in the 2012 Crab Bowl.

Hayward gains at least 30 pounds while on the scout team this season.

A hybrid linebacker/defensive end, Hayward has great height at 6'5". The only problem - he needs to put on a significant amount of weight. He's done it before, gaining twenty pounds his sophomore year of high school, but this will probably be more drastic. Hayward's high school coach said in an interview with Matt Bracken that he expects the freshman to get up to 240/250 at Maryland, which fits in very nicely with his skill set.

He's a good tackler with good speed and great height, and with the expected weight gain, he probably fits better on the strong side, with Marcus Whitfield, Clarence Murphy and the other hybrid D-linemen. That position doesn't have a whole lot of talent at the moment (and the top three players on the current depth chart are all upperclassmen), making Hayward one of the more intriguing prospects coming into the program this year.

Before transferring high schools, our next player attended a school with the same name as a local football powerhouse.