Two Terrapin seniors have been selected for a postseason showcase.

Ah, 'tis the season where we found out the post-season all-star spots for countless (hopefully) seniors with NFL dreams. For those that don't know, there are a number of these kind of games (the Shrine Bowl and Senior Bowl being lead among them), and Maryland has sent quite a few players to them in the past.

The first two from this year's senior crop have come in, as tight end Dave Stinebaugh and offensive guard De'Onte Arnett will play in the College All-Star Bowl in Furman, as first reported by Alex Prewitt.

#Terps TE Dave Stinebaugh and OL De'Onte Arnett will play in the College All Star Bowl on Feb. 14 at Furman. Signed over the weekend.

Neither player is expected to be drafted, but the opportunity to play in a game like this is a good one -- the hope is players like Stinebaugh and Arnett can show their talents against other players competing for training camp spots and get signed as an undrafted free agent.

Recapping the careers of Maryland's seniors 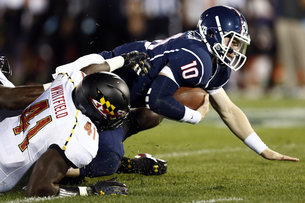 Before their home finale, we took a look at the careers of all of Maryland's seniors.

Stinebaugh suffered multiple injuries in his Maryland career, but managed to keep it relatively healthy this season. The tight end played in ten games, catching 13 passes for 188 yards and two touchdowns -- both coming in wins (Virginia and West Virginia).

Arnett entered the program as a four-star defensive lineman, but quickly moved to the offensive line when depth problems arose. He has been one of Maryland's more consistent lineman over the past two years, and was one of just six players on the team to start all 12 games this season.

Outside linebacker Marcus Whitfield will likely get a spot in one of these postseason all-star games as well, as might Zeke Riser and Isaac Goins. Were Dexter McDougle healthy, he would certainly get a spot as well.