Breaking down the footage of Maryland's newest 2014 commitment.

There's two basic conventions when it comes to long-snapping.

The more traditional school is based on what's called the BRVTC curve. The acronym stands for Balance, Release, Velocity, Trajectory & Consistency - the five classic tenets of the craft.However, there's been a revolution in recent years in which the snap itself has been de-emphasized slightly to make way for the growth of new positional elements such as post-snap scheming, footwork, snap-angle ....

Just kidding -- I totally made all that stuff up. I don't know a damn thing about long-snapping and I'm not about to go all UMDTerps11 and unleash a 3,500 word sabermetrical encyclopedia about it. It's a long-snap, which is sort of like the snap the quarterback takes - only longer. That's about as scientific as we're getting in this space.

But that doesn't mean we can't take a closer look at newest Terp commit Nate Adams on film and try to draw some conclusions about the young man. Let's get to it. 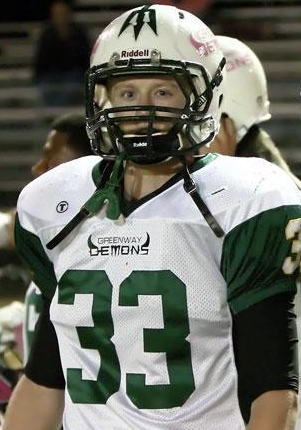 Senior season: Adams' Greenway Demons finished 6-4 but missed the playoffs. His punter averaged 37.4 yards on 29 punts, a solid high school average, while his kickers were a combined 36-for-40 on PATs. Based on those numbers, I think you could safely say that the team had an effective kicking game with Adams providing the snaps. Perhaps more interesting is the fact that as a linebacker, Adams set a school record with 101 tackles and was on the all-state list for two years. So though he seems to project to be a long-snapping specialist at Maryland, the Terps are definitely getting an athlete and a football player, too. Can't hurt. Finally, as Pete previously reported, Adams will be playing in the Semper Fi All-American Bowl in January.

Offers: Adams had listed offers from Maryland and Air Force with interest from Arizona State, Auburn, Stanford and Washington State.

On film: I don't really know what to say about his snaps on film other than every one makes it to the punter or holder cleanly. Of course, if I were compiling film for a long-snapper, I'd probably go ahead and leave out any snaps that sailed out of the end zone or ground balls that five-holed the punter. Let's just assume that he can snap or he wouldn't be an All-American and a Division 1 prospect.

Here's the good thing about his film: play after play, he snaps, then takes off downfield and makes plays on punt coverage. He disrupts things, he makes tackles, he forces fumbles. I'm no student of punt coverage, but I don't believe I've ever seen a long-snapper who doubled as his team's gunner. Adams definitely has many plays on this film where he beats his teammates to the ball. I wasn't any more excited to watch long-snapping film than any of you probably are, but give it a look and you like the kid and his motor. As I said above, he's an athlete and a football player. Programs need kids like that, regardless of what position they play.

2014 Outlook: The opinion here is that you only give a full ride to a long-snapper if you believe you are going to have hassle-free snaps for four straight years. Adams projects to be the only scholarship long-snapper next season, so expect him to take over the role immediately, provided he proves himself trustworthy in camp. I suppose a redshirt isn't out of the realm of possibility, but my guess is that would only happen if he struggles adjusting to being on a college line. If Adams becomes a good long-snapper at Maryland, it means we'll probably never hear his name again except for maybe in position-by-position season previews. And if he's bad, yeah, we'll get to know him a little.

Longterm Outlook: It's the same as the 2014 outlook, so I'll use this section to try and raise what I think is the most interesting question about this commitment: should Maryland be handing out scholarships to long-snappers? I'm going to vote yes, although I can respect the argument against it. There were certainly times last season where it might have been nice to have another scholarship cornerback, or, oh, let me think, how bout another QB in the 2012 season? Most years a positional need will arise due to injury at some point, but of course you don't know when or what position that will be so you can't hand out scholarships for it. If this particular scholarship buys us four years of clean snaps that hopefully become booming punts, reliable kicks and just all-around strong special teams play, it's money well spent. May your snaps be true, Nate Adams. Welcome to Terp Nation!