Breaking down the footage of Maryland's newest 2014 commitment.

Editor's note: Please welcome FlaTerp, who some of you may know from the comments section. He is one of our newest contributors and this is his first post. 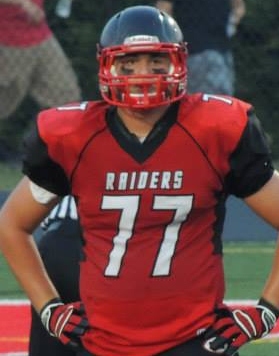 Position: Tackle. Also played across the DL in high school but was offered as an OL.

The video: You can find his tape here.

Senior season: Christie was his team's starting left tackle in a playoff season in 2013. He is no stranger to pass blocking, as his QBs routinely threw the ball 20-30 times or more per game and rolled up impressive yardage totals. Team injuries also thrust Christie into a starting role on defense, where he played mostly nose but logged time at multiple positions. After the season, he was the voted co-winner of the Zellner Award by the football coaches of Suffolk County, an honor given annually to the county's top OL.

Offers: Maryland was his first Div. 1 offer and second overall offer after Albany. He had reportedly received interest from Temple, BC, Syracuse, Rutgers, UConn as well as FCS schools such as Maine, Rhode Island and Fordham.

On film: Let me first say that film can be a very deceiving medium for evaluation. I would argue that you learn a lot more about a kid from those plays that didn't make film than the ones that did. How quickly does he get up after being knocked down? Does he take plays off or quit on them after getting beat? What's his body language like? A compilation of somebody's 25 best plays of the season tells you none of these important things -- you've got to stand on the sidelines to see that stuff -- but you can still draw conclusions from the highlight reel.

With Christie, the things that stood out most were his raw size as well as his movement and athleticism. He is a big kid but it looks like very good weight and he can really move around. In news stories, the first thing his coach says about him is that he's a good athlete, which is nice to hear. He also appears to have good knowledge of the playbook and you can see, during these run plays, Christie executing exactly what was designed. He can really move his feet, but his footwork is definitely a little choppy while his upper body goes upright at times -- a bad combination that could lead to him getting bulldozed early in college practice. 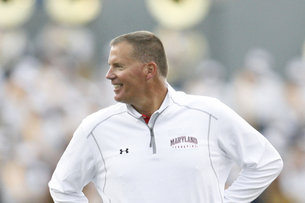 Coverage on every single Maryland recruit in the class of 2014.

In fact, with his technique in general, I think you can see why schools were slow to offer him despite his big frame and his mobility. If you watch film of Damian Prince or Derwin Gray, you'll see nastiness that you don't see in Christie's film. He's physically dominant in some of those blocks but doesn't engage them long enough and doesn't always go for the kill when it's there. D-1 recruiters want to see nasty linemen with a highlight reel full of pancake blocks against overmatched high school opponents. I think this mixtape only had 3 or 4 pancakes and you'd hope for more out of somebody that big and mobile who is playing in a relatively weak region for high school football.

2014 Outlook: Looks like a certain redshirt to me, but that's not a bad thing. Let's see the kid put on 35+ pounds in 2014 while honing his skills and learning the scheme. We've got other first-year guys coming in like Gray, Cohen, Mazyck and Prince (hope, hope) who should be plenty game-ready if we need true freshman contributors (and I'm sorry to say it sure looks like we will).

Longterm Outlook: My theory on offensive line recruiting is that it's the position on the field with the widest gap between high school and college. There are gifted big boys like Cyrus Kouandjio, Derwin Gray and Damian Prince whose film screams "game-ready" but those are few and far between. In most cases, colleges are simply recruiting a big body knowing full well they'll be building a D-1 lineman from scratch. Christie has that body and appears on film to be an advanced athlete for his size. There are some negatives, too, aside from some of the questions that arise from film.

The timing of this commit is suspicious, coming so soon after Maryland missed on Ruble and Applefield. That says to me that he had a conditional offer and wasn't one of the guys Maryland initially felt like it had to have. Also, looking at his offer list, I'm seeing interest but no offers from Fordham, Maine, Rhode Island, UConn, etc. The fact that none of those schools offered him is bothersome -- there's no nice way to say that but it's there.

I'm generally not wild about Maryland being the first big school to jump at an under-the-radar prospect, but that doesn't mean he won't be a good player. I remember hating the Alex Twine verbal because he chose us over Towson and Maine or something -- I think you could probably find a post or two back then where I panned it. Fast forward a couple years and now I love Twine and he definitely belongs. So if the take-away is that I have no idea what I'm talking about, it certainly wouldn't be the first time.

Longterm, this recruit appears to have the size and athleticism to be a meaningful Maryland lineman provided he buys in and makes the most of the resources available to him. Welcome to Maryland, Sean Christie!