Profiles in Terpage: A Countdown to the basketball season - Seth Allen

Our series continues with a sophomore guard hoping to recover quickly from an injured foot.

Share All sharing options for: Profiles in Terpage: A Countdown to the basketball season - Seth Allen 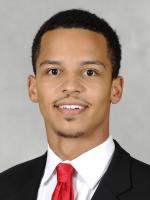 Recruiting Ratings: 4 star, 42 best shooting guard nationally by ESPN, 3 star by everyone else.

Who is Seth Allen? That's the question many were asking when news broke that Mark Turgeon had offered a scholarship to a kid in Virginia that no one had really heard about. Allen was very much under the radar but as soon as the recruiting services heard about his Maryland offer, he immediately jumped to a 3 star across the board and finished as a 4 star with ESPN.

Successfully coming back from his injury, contributing immediate on offense and at the point guard position, while averaging 12 points per game through ACC play.

For Allen, this section completely changed after his unfortunate foot fracture that will keep him out until at least early January. Initially, Maryland was counting on him to be the starting point guard as Roddy Peters eased into the role. Now, the focus is on getting Allen back and healthy for Maryland's final season in the ACC. The timeframe for his return is early January, but it will probably take time to ease him back into the rotation. Once he's healthy, I expect Mark Turgeon to slowly work Allen into the mix and hopefully he can contribute significant minutes by February and into post season play. Seth should be able to provide a fresh spark for this team as the heart of conference play begins and, barring any setbacks, I expect him to make significant contributions on offense and at the point guard position.

Our next player was arguably one of the most important recruits in the Mark Turgeon era (so far).