Profiles in Terpage: A Countdown to the Basketball Season - Evan Smotrycz

Our series continues with a transfer from Michigan

Share All sharing options for: Profiles in Terpage: A Countdown to the Basketball Season - Evan Smotrycz 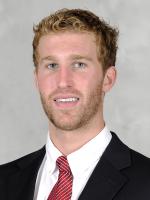 Collegiate Stats: 7.7 ppg as a sophomore at Michigan

Smotrycz committed to and played two years at Michigan before transferring to Maryland to finish out his last two years of college. He was a consensus top 100 player and helped lead Michigan's reemergence on the national scene as a basketball power.

Smotrycz, who had to sit out last season after transferring from Michigan, will be playing in his first real game in over a year when the Terps tip off against UConn on Friday. He gives Maryland a starter at the four position that they have been lacking the last few seasons. Evan can shoot from outside, attack the basket and get to the free throw line, where he's a good shooter. He is a very complete player who should compliment sophomore forward Jake Layman very well and provide opposing team's with nightmares as they figure out how to cover them. Smotrycz should have a very solid season, giving Maryland another solid scoring option while potentially becoming one of Maryland's most frequent visitors to the free throw line.

Our next player, I think, kinda looks like Stephen Curry.