Recapping the careers of Maryland's seniors before their final home game

More than a dozen seniors will be playing their final game in College Park.

Share All sharing options for: Recapping the careers of Maryland's seniors before their final home game

Maryland plays Boston College on Saturday, an important game for two specific reasons -- it is the Terps' last ACC home game, and the last time Maryland's seniors play a game in College Park. Some of the players transferred into the program, but for the players who were recruited to College Park out of high school, they played their first season under Ralph Friedgen before being a part of the change of the guard. They currently hold a record of 21-26 over those four years, although that could look more favorable by the end of the season.

Let's take a look at those seniors, in alphabetical order, and the contributions they made to the Terrapin program.

More: Who would be the best fictional judge for the ACC/Maryland case?

One of just a few senior starters for Maryland this season, Arnett has had a up-and-down career with the Terrapins. Originally recruited as a four-star defensive end, Arnett redshirted in 2009 before moving to the offensive line in 2010 to help with depth.

Arnett's role increased in 2011, playing five games on the line, but he really started to make an impact in 2012, when he started nine games -- four at right guard, five at left guard. He entered 2013 as the starting left guard for the Terps, and that's been one of just two offensive line positions that hasn't been changed up throughout the year -- he's started all ten games at the position.

A late addition to Maryland's roster, Buchholz is better known for his exploits on the Terps' wrestling team last year after transferring from Rutgers. He held a 6-12 record as a junior, but helped propel Maryland to wins over future conference-mates Purdue and Nebraska. He was added to the football team after Tyler Cierski's injury to help with depth at fullback.

The big wide receiver transferred to Maryland last year from Frostburg State, and has served as a valuable member of the scout team. At 6'3" and 205 pounds, he allows the Terps to simulate matchups with bigger wide receivers in practice.

Yes, Maryland is going to a bowl game. No matter what. 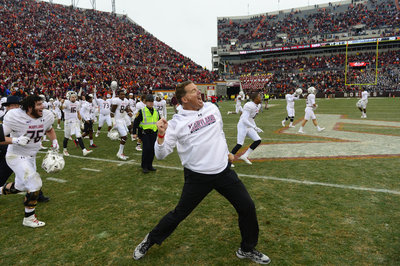 Randy Edsall and company will be bowling this winter.

Another transfer into the program, Goins has had a big impact in his time in College Park. After two fantastic seasons with Contra Costa College in California, Goins played in nine games last season with nine tackles, and looked poised to have a solid season as the team's nickelback this year. Injuries befell starters Dexter McDougle and Jeremiah Johnson, however, and Goins was thrust into the role of starting cornerback. He has started nine games this season, with 42 tackles (fourth on the team), two interceptions (second on the team) and six passes defended (first on the team).

Harraka was one of four former walk-ons to receive a scholarship this season, and though he was listed as a sophomore last season, he is considered a senior this year. With Maryland's offensive line depth issues, Harraka has had a role on the team, playing in nine games as a reserve guard.

Johnson was a highly-touted recruit coming out of Dinwiddie, Va. who was never really able to put it all together in College Park. In 2010, as a redshirt freshman, Johnson actually played in all 13 games, mostly as a reserve defensive end, and even started a game. Since then, it's been mostly downhill, as he played in three games last year and just four so far this season, recording one tackle.

One of Maryland's many players plucked from the state of Georgia, Klemm started his Maryland career by playing in 11 games in 2010 as a redshirt freshman. In Randy Edsall's first year, he played in 11 games, and last season played in 12, starting the first four at left tackle before Mike Madaras took over. This season, Klemm has struggled with a foot injury, not yet seeing any time on the field.

Over his first three years with Maryland, it was easy to see the potential with Dexter McDougle. The cornerback had fantastic big playmaking ability, coupled with a nose for the ball and the build to make hard hits that no corner should be able to make. However, much of that was set back in the eyes of Maryland fans with some maddening inconsistencies -- namely, McDougle would often get beat on the deep ball.

That all changed in 2013, as McDougle had a roaring start to the season, with 14 tackles, three interceptions (including one returned for a touchdown) and five passes defended before suffering a season-ending shoulder injury against Connecticut. The injury tragically cut his Maryland career short, but scouts were taking notice and he certainly has a shot of playing in the NFL.

Long snappers are a whole lot like referees -- you don't hear about them unless they mess up. Luckily for Maryland, they didn't hear much of Parcher's name throughout his years with the program (and two years as a starter), as he performed admirably since taking over for Tim Downs, who was a steady presence for the Terps for many years.

One of the smallest players on the roster, the 5'7", 170 pound Perry has made two appearances in his Maryland career -- against North Carolina last season, and against FIU this year. He made a tackle against the Tar Heels last year, and has been a mainstay on the scout team player of the week list.

A fifth-year transfer from Houston, Riser missed all four non-conference games wit an injury, but has helped the defensive line depth tremendously in ACC play. He has five tackles, including one for a loss, with one quarterback hurry this season.

Greg Parcher is out with an abdomen injury, so Rosenblum will actually be receiving his first playing time of his career on senior day. He joined the team this season, and is from Annapolis.

A local kid from Baltimore, Stinebaugh has been a major part of the program for years, even with injuries cutting short two of his seasons. After making most of his impact last year on special teams, Stinebaugh has caught 12 passes for 168 yards and two touchdowns this season.

The younger brother of former special teams star Austin Walker, Alex walked on to the team and has done a fine job as a reserve nose tackle for the team. He has filled in for Darius Kilgo at times this year (when the situation called for size, and not speed), and is the son of Doc Walker. 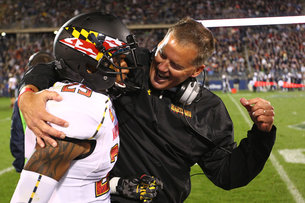 The two seniors received weekly accolades earlier in the year

Whitfield switched repeatedly between a spot on the defensive line and outside linebacker throughout his career, and really struggled to find his place in the program until this season, where he has simply dominated as the team's starting SAM linebacker.

The senior was even more successful early in the season, when he and fellow pass-rushing expert Yannick Cudjoe-Virgil were able to come off the edge in tandem, forcing opposing offensive lines to focus their efforts on one of the two. Even after Cudjoe-Virgil's season-ending injury, Whitfield has remained a force in opposing backfields all year long.

Whittington made his Maryland debut against West Virginia this year, but did not record any statistics. He has spent time at both defensive back and wide receiver in his time with the Terps, and is listed as Maryland's backup slot wide receiver on this week's depth chart.

A warm thank you from all of us at Testudo Times to all of Maryland's seniors, and we wish them the best of luck after their graduations.