The Terps will kick off the Paradise Jam when they play winless Marist on Friday at 4:00 PM in the Bahamas.

On Friday, Maryland kicks off what will be a three game stretch in four days as the participate in the Paradise Jam in the U.S. Virgin Islands. The format of the tournament is a single elimination, but each team plays three games, as they determine who finishes in each place, first through eighth. The winners in Friday's games will have off on Saturday and play again on Sunday and Monday, with the winner playing in Monday's championship game. The eight teams in the tournament are:

First up for Maryland is Marist, a winless team that is very much struggling this season. Their average margin of defeat is by almost 27 points and Kenpom ranks them as the 289th best team in D1, which is the worst of any team in the tournament. So how do the Red Foxes match up against Maryland?

After Sunday's loss to Oregon State, when Maryland got simply dominated inside, the immediate concern against Marist is how will the Terps contain the 6'10" giant towers that are Kemp and Prinsloo? Might we see some more Damonte Dodd on Friday? Mark Turgeon was perplexed about his team's defensive play against Oregon State and following the loss, mentioned the need to build his team's depth, especially since they'll be playing three games in four days.

Kemp and Prinsloo are both serviceable bigs; they're not Alex Len, but you can't just dismiss them, either. They can score, if you let them. Maryland needs to prevent both from getting the ball in the low post, helping on defense, when necessary and not getting caught up in pick and rolls to the basket.

Take a look at this defensive sequence for Maryland from Sunday's loss to OSU. The play eventually ends up with OSU scoring a basket. Here's the first image from the play, which shows Charles Mitchell in a position that isn't inhibiting the OSU player from simply rolling to the basket uninhibited: 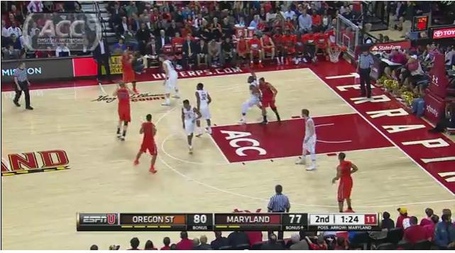 As you can see, once the ball gets to the top of the key, the OSU player lobs the ball towards the rim, where his teammate can out jump Mitchell for the ball and has nothing inhibiting him from the hoop. Evan Smotrycz doesn't get over to help Mitchell until it is too late. 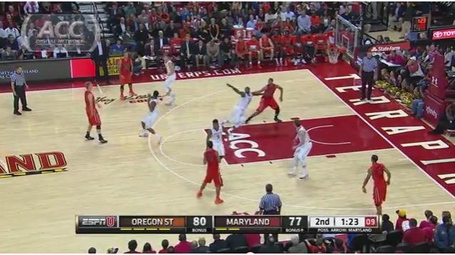 The OSU player catches what was a poor pass and recovers and still scores. But the bigger issue here is how he was allowed to get to the basket. 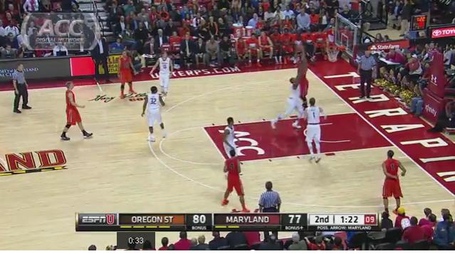 Plays similar to this allowed OSU to be able to score almost at will in the paint, and not just with their bigs. Maryland can't allow these type of easy scoring opportunities to occur on Friday.

As long as Maryland can improve on their defense from Sunday, they should easily defeat Marist on Friday. While Lewis and Hart are both good guards with decent size, Maryland should be able to use quickness and the outside threat of Jake Layman and Evan Smotrycz to stretch the floor and open up lanes to the basket. The Terps need to do a good job crashing the boards, where the Red Foxes really struggle and make smart plays on offense.

The most pressing question for Maryland will be how freshman Roddy Peters handles being a starter and who goes to the bench for Maryland if he gets the expected starting nod. We'll have more on that later.

Maryland should win by 20+, but don't be surprised if Marist has early success scoring inside. The game could be within ten or so at halftime but Maryland will prove to be too much in the second half. Terps win 85-57.