Profiles In Terpage - A Countdown to the Football Season: Lorne Goree

Share All sharing options for: Profiles In Terpage - A Countdown to the Football Season: Lorne Goree 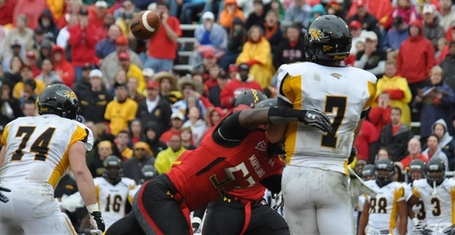 Today we profile a player who did very well filling in at middle linebacker last year.

Collegiate Stats: 60 tackles (30 assisted), six for a loss, three and a half sacks, one interception, three passes defended, one fumble forced, one fumble recovered

Goree was a standout at Flowers, posting ridiculous stats in his junior year and being named a consensus all-state player in his senior year. Goree was also first team all-county and an honorable all-state selection as a junior.

The linebacker played in the inaugural Crab Bowl, and was one of the brighter prospects in the state, but poor grades/SAT scores required him to spend a year at Fork Union before he was able to enroll. As a result, Goree actually has a year more under his belt than most redshirt sophomores, and gained about 20 pounds of muscle in his time there.

Goree chose Maryland over West Virginia, Illinois, Michigan State and others, thanks to the school’s proximity to home. He calls himself a "Maryland boy", and told Matt Bracken back when he committed that it meant a lot to him to have the opportunity to "represent your city and state".

After redshirting in 2010 as a WILL linebacker, Goree moved to the inside last year and thrived. Injuries to Darin Drakeford and Kenny Tate meant a lot of playing time for the redshirt freshman, and he ended up finishing fifth on the team with 60 tackles.

Lorne "L.A." Goree. It's what he already goes by, and we can't think of anything better.

Being named a freshman All-American by the College Football News.

Not being the outright starter at MIKE this year.

Goree beats out Cole Farrand and Abner Logan for the starting spot at MIKE, securing his position in the starting lineup for the next three years.

Goree is beat out by either Farrand or Logan, meaning he either has to switch positions or spend the rest of his Maryland career as a back-up.

Lorne Goree is currently listed as the back-up at MIKE, in front of Daryus Dutton but behind Cole Farrand. This was one of the bigger surprises of the spring depth chart release - Goree had a great year in the middle last year and Farrand played almost exclusively on special teams.

Regardless, it would still be surprising to see anyone but Goree starting at MIKE come fall. Abner Logan should come in and challenge for it, and Goree obviously has to beat out Farrand, but after such a productive year last season and with the amount of talent and relative experience he has, he undoubtedly deserves a starting spot in Maryland's linebacking corps.

For their first season in a 3-4, Maryland could certainly do a lot worse than a Tate-Goree-Hartsfield-Drakeford set-up.

Our next player was a record-setting discus thrower and shot-putter in high school.