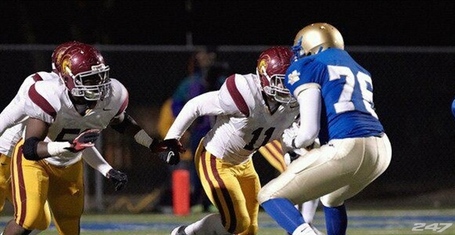 Maryland has picked up their fourth commitment of the 2013 recruiting class, as McEachern (Ga.) offensive tackle Jajuan Delaney committed to the Terps, as announced on his Twitter.

Dulaney was offered by Maryland just five days ago, and IMS reported that the Terps immediately solidified a spot in his top three. Less than a week later, he's the first lineman in Maryland's newest recruiting class. He's rated a three star recruit across the board by the recruiting services.

Dulaney stands at 6'4" but weighs only 255 pounds, so while he has a good enough frame he's going to need to put on some weight before becoming a viable ACC player. He had offers from Cincinnati, East Carolina, FIU and Marshall, but also listed interest from Miami and Ohio State, among others.

We haven't found a highlight video of Dulaney yet (EDIT: via psmitty, here's a link to a highlight video), but ESPN's scouting report says he's tough and a good space blocker, if you're into that kind of thing. He's a solid three star prospect, helps continue Maryland's pipeline into Georgia, and once he puts on some weight he could be an option at offensive tackle for the Terps in the future.