Profiles In Terpage - A Countdown to the Football Season: Abner Logan

Share All sharing options for: Profiles In Terpage - A Countdown to the Football Season: Abner Logan 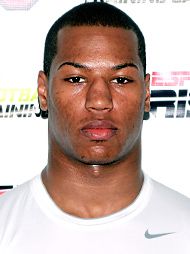 Massachussets isn't exaclty a high school football haven, but Abner Logan still managed to burst onto the national scene. He was one of the most gifted athletes in the state by far, with a rare combination of size, speed, and strength, and was one of only five four-star prospects in the entire state.

Logan was down to Maryland, North Carolina State and Northwestern, but made two visits to Maryland and reportedly loved them both. His primary recruiter was linebacker coach Keith Dudzinski, and Logan cited family in the area and the business school at College Park as his primary reasons for becoming a Terp.

Logan was named All-State at running back last year, and also was on the baseball and track teams. He is among the more active (and funny) Terps on Twitter, so I would suggest giving him a follow.

Logan breaks through, gets the starting spot at MIKE and earns freshman all-conference honors.

We talked about it yesterday in Brock Dean's profile, but it's worth going over again. For Maryland's two inside linebacker commits, there appears to be a sensible path. The MO position is currently stronger, with Demetrius Hartsfield and Bradley Johnson, but Hartsfield is a senior and Johnson is a junior unlikely to become a full-time starter. The MIKE position is younger, with sophomore Cole Farrand and Lorne Goree, but neither of them have a hold on the job.

As a result, the most likely scenario is Abner Logan getting playing time at MIKE this season, and possibly starting. He's an incredible physical talent who comes in as a highly-rated linebacker recruit and could be a force for four years in the Terps' front seven. For Dean, that means a probable redshirt season to put on some pounds while being groomed to take over at MO with Hartsfield's graduation.

Assuming Maryland sticks with Brian Stewart's 3-4, the Terps are going to need two strong inside linebackers to help anchor the unit. Randy Edsall brought in two of the best in this part of the country in Dean and Logan, and their paths seem to be sit as the future of those two spots. After watching their high school tapes, it's hard to complain.

Our next player is suspended for all of next season.