Dying to see what Maryland's oft-teased new basketball uniforms will look like - especially the recently confirmed Maryland Pride variant? Us too. Unfortunately, there's no official unveiling in sight. Fortunately, there is this: 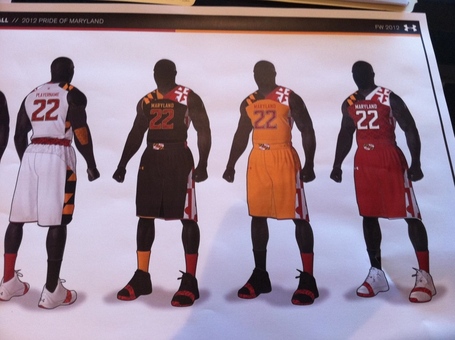 That's a rendering of what appears to be basketball Pride jerseys, provided to us (exclusively, as far as I know) by a source inside the athletic department. (Unlike the field mock-ups that were doing the rounds a few weeks ago, this is not fan art. It's the real deal - or at least was at some point.) The artwork style clearly matches the football renderings that leaked last summer, which lends credence to their legitimacy. This image is not brand new - it's from several months ago - so there's been plenty of time for alterations, and it's likely that at least some have been made. There's a good chance these aren't the finished product. But they do provide us with a very good idea of what that finished product will look like.

[UPDATE: The athletic department has made a statement on the uniforms, saying:

The Pride design has become a central part of the identity of Maryland Athletics and it presents a tremendous opportunity to be incorporated into our basketball program. However, the designs being circulated today on the internet are only draft renderings. Maryland Athletics and Under Armour will make sure our fans know when we launch Pride for Maryland Basketball.

This is exactly what we said all along (read the paragraph above), so it doesn't change much. It's a rendering, not a final product, and changes will likely be made. You shouldn't take the statement as saying that they will or will not look like this (they obviously want to keep people guessing and won't tip their hand either way) but it is confirmation that this was in the design process.]

Some design cues are clear and will all-but-certainly show up in the uniforms. Aside from the obvious flag sections, you can see they're going full "Terrafont" here, sporting the same numbers and "Maryland" typeface as the football and lacrosse uniforms. The Terrafont will replace the current typeface and numbers, which have been around since the late '90s (and, of course, won a championship). Again jibing with the football version, the numbers are overlaid with a flag pattern Under Armour is calling Baltiflage. Interestingly, the same pattern is overlaid on the entire shirt in the red strip, though that doesn't appear to be the case in the other three versions.

I expect the flag patterns on the shoulder to be converted into Terraprint - the turtle shell pattern - in the "regular" look, which happened with the football uniforms. (Which would appear to mean no side panels.) But with four different colors of the Pride variant, perhaps these will be a more regular occasion than the twice-a-year proposition for football. An interesting touch is the contrasting waistband - jersey color in front, red in back. I'd almost prefer it to be contrasting all the way around, but this adds a nice bit of style without being overpowering, and I imagine will be present in the standard issue version as well. And the flag on the front of the shorts instead of the back (and no word mark!) is a certain, if admittedly minor, upgrade.

Other than that: well, they look pretty basic - or at least as basic as a giant flag uniform can look. Appears Mark Turgeon was right in saying that they're not as in-your-face as the football duds. I imagine the same will hold true with the standard issue uniforms, too - without a helmet, there's only so much you can do.

Still, they'll be one of the crazier things to take a basketball court next year. Throw in Kentucky and the opening of the Barclays Center, and it's looking like November 9 is going to be quite the event.

(P.S.: Do us a favor and, if you take the image from the site to post elsewhere, please link back to this post. Thanks.)