Profiles In Terpage - A Countdown to the Football Season: Brock Dean

Share All sharing options for: Profiles In Terpage - A Countdown to the Football Season: Brock Dean 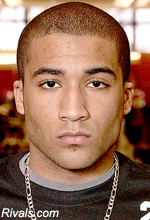 A two-time all-state selection in high school, Brock Dean was one of the top linebackers in the state of Pennsylvania over the last few years, and helped lead the Crusaders to two straight appearances in the state finals.

Dean received scholarship offers from Pittsburgh, Temple, and Maryland, but it was the recruiting work of Greg Gattuso that got him to be a Terp. Gattuso originally recruited Dean at Pitt, and he brought his expertise of Western PA with him to College Park, as well as a few prized recruits - including Dean and Quinton Jefferson.

Dean was impressed by the coaching staff at Maryland, as well as the business program at College Park, and he committed to the Terps in late June of last year. During the recruiting process, Randy Edsall told Dean he was hoping the linebacker could be a four-year starter in College Park, and the opportunity is certainly there for him to make an impact up the middle.

Not winning either of them.

Dean beats out Cole Farrand and Lorne Goree for the starting job at MIKE.

Brock Dean has some of the most impressive high school tape of any of Maryland's 2012 recruits, especially among those on the defensive side of the ball. He played all three linebacker positions in high school, with most of his time spent at WILL, but will move to MIKE when he gets to College Park this fall. He's got a good frame to work with as a middle linebacker for a kid just coming out of high school, and could meet Coach Edsall's goal of a four-year starter.

Maryland will have two middle linebacker positions in Brian Stewart's 3-4 - MO, currently occupied by Demetrius Hartsfield and Bradley Johnson, and MIKE, where Cole Farrand, Lorne Goree, and Daryus Dutton are listed. Dean's best chance for short term playing time is MIKE, as Goree and Farrand are still young and relatively unproven (although Goree had a very good year last season), but MO is probably his best long-term opportunity. Hartsfield is a senior, and while Johnson is a junior, it's not inconceivable to think Dean could beat him out for the job next season, especially if they move Johnson back outside.

Added to all that is the presence of Abner Logan, a four-star linebacker who is supposedly going to be playing an inside linebacker position as well. Put it all together, and the most likely outcome is Logan playing right away at MIKE, with Dean redshirting and being groomed to take over the MO role.

Our next player was the highest rated defensive recruit in Maryland's recruiting class.