Profiles In Terpage - A Countdown to the Football Season: Roman Braglio

Share All sharing options for: Profiles In Terpage - A Countdown to the Football Season: Roman Braglio

Today we profile the only incoming defensive lineman in the 2012 class. 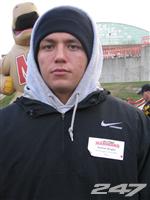 Roman Braglio was one of the top defensive linemen in the state of Maryland, and thus attracted the attention of both Randy Edsall and defensive line coach Greg Gattuso, who was the head man in young defensive end's recruitment. Last season, he played in both the Chesapeake Bowl and the Crab Bowl, with three QB knockdowns in the former.

Braglio earned consensus all-state honors and was named first team all-met last year. He played on both sides of the line in high school, was one of the top wrestlers in the state, and also threw shot put. His only other listed offer was from West Virginia, but he also received interest from Penn State, Tennessee and Virginia, among others. He committed to the Terrapins in March of last year.

Braglio and his father were visiting campus that March, where they watched practice and Gattuso showed him film his defense at Pitt, highlighting where Braglio would fit in the 4-3. Two things:

1. I understand Gattuso is the defensive line coach and was Braglio's primary recruiter, but seeing as Todd Bradford was the defensive coordinator for Maryland last year, wouldn't it make more sense for Braglio to see his defense?

Keith Bowers has a sophomore slump, and Braglio becomes the back-up to Andre Monroe.

Roman Braglio is one of the better defensive prospects coming into Maryland this season (I'd argue third, after Abner Logan and Brock Dean), but it looks likely that he will redshirt this year. While there are two defensive end positions, there are seven players at those positions who all have a legitimate claim to playing time.

Braglio is more likely to fit in at the defensive end position where Keith Bowers, Andre Monroe, and Ian Evans are currently listed - it seems that's for the smaller ends. All three of them are sophomores, however, so you might see him instead at the other defensive end slot, where there are three upper classmen and one freshman.

Either way, it seems extremely unlikely that Braglio will play this year. The Terps have a lot of depth at end, and a year redshirting will give him some time to put on weight and get ready to play next season.

Our next player was Randy Edsall's first commit as Maryland's coach.

Maryland1206 got it again yesterday, giving him another two-point lead.