Profiles In Terpage - A Countdown to the Football Season: Avery Thompson

Share All sharing options for: Profiles In Terpage - A Countdown to the Football Season: Avery Thompson 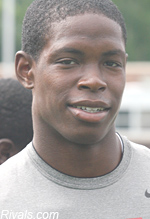 High School Stats (Senior Year): 75 tackles (40 assisted), two and a half for a loss, five sacks, two interceptions (one for a touchdown), one forced fumble, one fumble recovery

Thompson was named honorable mention all-state after a senior year in which he helped Grassfield to a 10-2 record, but his junior season was even more impressive, at least statisically. He had 113 tackles (nine for a loss) that year, making second team all-district.

Thompson comes from a military family - his dad is a lieutenant colonel in the Army and is currently stationed in South Korea - and he was born in Tacoma, Washington. He was one of the top linebacker prospects in Virginia last year, but Maryland was his only offer. He also received interest from a handful of major programs, including Penn State, Virginia and Virginia Tech.

Thompson was recruited by Edsall while at UConn, and his familiarity with the coach was a key factor in his recruitment.

On a slump with these, I have no idea. Your suggestions in the comments.

Getting his only offer, from Maryland.

Maryland was his only offer.

Thompson gets playing time as a reserve outside linebacker and on special teams as a freshman.

The most likely scenario, redshirting.

Like Stefan Houston, Avery Thompson is probably best built for the SAM position. After a productive high school career, he enters college as a linebacker with a frame more suited for a safety. Kenny Tate and Alex Twine are the obvious choices for the top two spots at the position, but with a year-long suspension for Lukas Foreman and NCAA transfer rules barring Kujo from playing this season, that third spot is most likely going to come down to a battle between Houston and Thompson.

Of the two, Thompson might be the better long-term prospect, although they're pretty similar. I have a feeling that Houston will be the one to play this season, however, if only because of the similarities to one of last year's surprising true freshman contributors - Twine.

It will be a battle this spring that not too many people will care about. A third-string outside linebacker spot doesn't exactly scream headline material. And honestly, it's hard to make an argument that people should care about it. Either Tate or Twine will start there this year, and after that Twine has the position essentially locked up for the next two seasons. Neither Houston nor Thompson are going to get a legitimate chance to start until their redshirt junior or senior seasons, barring injury. Either way, one of them should see some playing time this year, and could be a contributor in Stewart's four linebacker setup.

Our next player was high school teammates with a consensus five-star defensive recruit.