Profiles In Terpage - A Countdown to the Football Season: Stefan Houston

Share All sharing options for: Profiles In Terpage - A Countdown to the Football Season: Stefan Houston 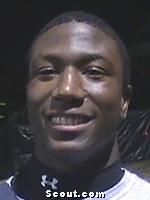 Stefan Houston is forever cursed as being the second-best Stefa/on in his class, but he had a great high school campaign as well. At Clarksburg, a relatively new high school in Montgomery County, Houston played linebacker, wide receiver and ran track. He was one of the more productive players in the state, making second team All-Met and second team Big Schools All-State after his senior year and playing in the Crab Bowl.

Houston also received offers from West Virginia, East Carolina, and Rutgers, and his primary recruiter was Tom Brattan. It's one of a few recruiting victories over the Mountaineers over recent years, and it's always good to push them back a bit over the border. Houston was reportedly impressed by Coach Edsall and his visits to campus, as well as the presence of a former Clarksburg teammate - Avery Graham, who has since transferred.

Stefan "No, the other one" Houston

Houston gets play on special teams and comes on late in the year as an outside linebacker, a la Alex Twine last year.

It's more realistic than nightmare-ish, but redshirting.

Official prediction - Stefan Houston will play this season. Alex Twine is the starter at SAM, but will likely be bumped by Kenny Tate when he recovers from injury. That's the position Houston is the best fit for, and with Lukas Foreman's one-year suspension and Kujo's need to sit out a year per NCAA transfer rules, Houston looks like the natural choice for third-string SAM linebacker.

Houston's greatest asset is his speed, and he's a very effective weapon against the run. He's kind of like Twine in terms of playing style, but with a little more hype as a recruit and slightly more raw athletic ability. Houston won't be chasing Twine or Tate for their jobs, but he could be a role player as a reserve linebacker and on special teams this season.

Our next player was recruited by a lot of big-time programs, but Maryland was his only offer.