Profiles in Terpage - A Countdown to the Football Season: Walk-On Linebackers

Share All sharing options for: Profiles in Terpage - A Countdown to the Football Season: Walk-On Linebackers

Today we move on to the linebackers. 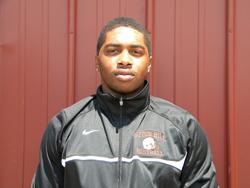 Yannick's down with Maybach Music.

How'd They Get to College Park?

Cudjoe-Virgil was born in Trinidad, but ended up in Baltimore and attended Towson High School. While there, he was a two-time team captain and was named all-division and all-county as a defensive end and tight end. He then went to Seton Hill, a small school near Pittsburgh that plays in the Division II WVIAC.

Cudjoe-Virgil played in ten games as a freshman and eleven as a team captain his sophomore year, and put together a monster campaign during that second season. During that year, he had 44 tackles, eight for a loss, with five sacks and a school-record six blocked kicks.

Just like with Anthony Perry when talking about the walk-on defensive backs, we don't really know anything about Daryus Dutton, besides that he's an inside linebacker who went to local Northwest. Send any information our way via the comments section.

Kujo has to sit out this year per transfer requirements, so he won't be playing quite yet. He has potential, however, with good size and a great career at Seton Hill. Interestingly enough, he's listed on the depth chart as the third guy at SAM, behind starter Alex Twine and suspended Lukas Foreman. Meanwhile, Zach Dancel, who is also sitting out a year, isn't on the depth chart. To be honest, the transfer rules and regulations are extremely confusing, but it's hard to imagine why a player transferring from D-II to the FBS would have to sit out a year. That's what it says on Kujo's UMTerps profile, though, so that's what we're going with.

Dutton is listed as the third-string MIKE linebacker, one of the two inside linebacker slots, behind starter Cole Farrand and back-up Lorne Goree. It's hard to imagine he'll get much, if any, playing time there, and his best chance for playing in his first year at Maryland is as a special teams contributor.

Our next player was a star quarterback in high school.