Profiles In Terpage - A Countdown to the Football Season: Joe Riddle

Share All sharing options for: Profiles In Terpage - A Countdown to the Football Season: Joe Riddle 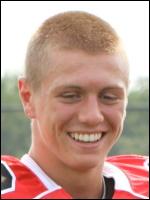 High School Stats (Senior Year): 111 carries for 917 yards and nine touchdowns with two catches for 46 yards and a touchdown

Riddle played running back throughout his career at Linganore, with some defensive play over his last two year and even a stint as a defensive end on the JV squad. In 2009, he was a part of the Lancers' state title team. After a junior year in which he ran for 968 yards and 14 touchdowns, Riddle started to get some attention in recruiting circles. He attended a camp at Maryland last june, and impressed the coaches enough that he was offered a scholarship. Then, the following exchange happened.

"So what do you think about that?" Edsall asked Riddle.

"Coach," Riddle replied, "this is where I’ve always wanted to play. So, I’m going to commit."

Riddle also listed offers from Cincinnati, Buffalo, James Madison, New Hampshire, Towson, and Virginia Military, but he's one of those kids who always wanted to go to the home-town school. Can't have enough of those.

Winning the state championship in 2009.

Riddle wins the kick returner job and does well enough to keep it.

A lot of recruiting agencies have been listing Riddle as a running back, but I see him as a safety at Maryland, just because of depth reasons. Maryland brought in two running backs last year in Justus Pickett and Brandon Ross and have two great ones coming in this year in Wes Brown and Albert Reid. Of the two safety positions, Riddle is better suited for free safety, where Eric Franklin is a senior and Undray Clark is currently the only player behind him (although fellow incoming freshman Anthony Nixon could be joining them there as well).

Ultimately, Riddle's best chance of playing this season (and probably throughout his career, at least on a consistent level) is at kick returner. He's extremely fast, but more importantly he has great acceleration, so he can get to his top level very quickly. Maryland had a ton of problems with their special teams unit last year - so much so that they switched coordinators and don't even have either of the return positions listed on the depth chart. Dexter McDougle, Jeremiah Johnson,Justus Pickett and even Stefon Diggs are probably the most likely options, but don't count Riddle out - he's got the skills for it.

Our next player went to a very small school in DC.