Profiles In Terpage - A Countdown to the Football Season: Alvin Hill

Share All sharing options for: Profiles In Terpage - A Countdown to the Football Season: Alvin Hill

Today we profile a relatively unknown recruit from Georgia. 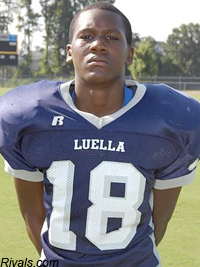 The younger brother of Virginia Tech cornerback Detrick Bonner, Alvin Hill was the definition of an under-the-radar prospect. After just starting to pick up some high-major interest, Hill went to a camp at Maryland, where he impressed coaches enough to earn a scholarship offer. The Terps were only the second school to offer the young corner, after FCS program Tennessee-Chattanooga, and Hill accepted the offer after only a few days of thought. He also received interest from Tennessee and Mississippi State, among others, and canceled four scheduled camp trips, including Georgia and Georgia Tech, after accepting the Terps' scholarship.

At Luella, he was the first-ever permanent team captain for the program, and set the school record for interceptions in a season when he picked off six passes as a junior. He runs the 40-yard dash at about 4.42, and excels in man-to-man coverage.

Getting his first FBS scholarship offer and committing almost on the spot.

Hill breaks through in a weak corner unit, getting solid playing time off the bench as a true freshman and putting himself in the discussion for the nickel role next season.

Randy Edsall showed a preference for a lot of under-the-radar recruits early on in the 2012 process, and Alvin Hill certainly fits that bill. A lot of Edsall's relative success at Connecticut came from molding those unheard of recruits into solid collegiate players, especially on defense. Just like Keith Bowers last year, Maryland fans should not be surprised if another true freshman comes out of left field this year to have a productive season. This year, that could be Hill.

Hill has good size for a corner, good man-to-man coverage skills, and good instincts for a kid just out of high school. While he doesn't have the long-term potential of some of Maryland's other defensive back prospects, Hill may be the one most ready to come in and play right away - well, besides Isaac Goins, but he has the advantage of two years of JuCo football under his belt.

That's not saying playing time will necessarily happen for Hill right away, though, but you've got to think at least one of the true freshman have to get in there. Dexter McDougle and Jeremiah Johnson essentially have the starting corner spots by default, and behind them there is not a single person who has played in a game with Maryland (unless you count A.J. Hendy, currently listed as a safety). Makinton Dorleant will almost definitely be the nickel back, which realistically leaves two more spots for depth purposes. The favorites are the two who are listed on the depth chart right now - Goins and walk-on transfer Anthony Perry. But if the coaches feel one of the true freshmen would do a better job, they'll burn that redshirt in a heartbeat. And that guy may be Alvin Hill.

Our next player was a local star in high school, and we're not sure what position he will play.