On the board, off the board, back on the board again. It's been a wild ride following the recruitment of Sam Cassell Jr., but last night he (we think) finished it off with what always seemed the most likely result: re-committing to Mark Turgeon and the Maryland Terrapins. Cassell the Younger announced his decision at the Capital Classic, and proceeded to drop 12 points (even getting up for a rare dunk) playing alongside all but one of his fellow Terp commitments.

(We weren't able to get out to see the game, but terpskin has a great recap up in the FanPosts. Check it out to see his impressions of Cassell and all the other Terps-to-be. There's also a 13-minute highlight reel up on YouTube via Capitol Hoops, as well as a quick Cassell interview.)

Just about everybody knows Cassell's game by now, but a quick recap for the stragglers. Nicely sized (between 6-2 and 6-4), he can play either guard spot in a pinch, though I think he's more of a natural two. He's a shooter, but not in the traditional, catch-and-shoot, Eric Hayes sense - he's more of a Terrell Stoglin-type, in that he can and will shoot (and hit) from just about anywhere over the half-court line. He'll take some shots that both you and Mark Turgeon shake your head at, but a good number of those go in (or at least did at Notre Dame Prep).

His biggest asset, then, might be his ability to unlock a particularly stringent defense, almost playing a Stoglin role -the difference being that, unlike Stoglin, the team isn't built around Cassell. That means his ability to score outside the offense isn't going to be a pick-your-poison situation. When Maryland has one of their patented Second Half Droughts and seemingly can't even get the offense into a set with turning it over, SCJ has the ability to hit an absolutely undefendible(?) shot - say, a 23-foot stepback fadeaway. It's not a shot you want to be taken on a regular basis, but when nothing else is falling because a defense has taken away other options, that type of shot can be a godsend. That's something he'll be able to do from Day One, acting as a sparkplug; the next challenge will be getting him to show off that kind of shot within the offense, to the extent that it's possible.

The rest of his game is still getting there, from what I've seen. He's neither particularly athletic nor a great penetrator; he makes up for that somewhat with his canny and general know-how, which helps him get a shot off from most anywhere, but he's not going to be getting inside with regularity. (That, in fact, is the biggest difference between himself and Mr. Stoglin.) He has a good handle and is a good passer, so he should be able to handle playing point without a hitch, although I don't think that's the first-choice situation. Defensively, he's not a game-changer. He can handle the less-dangerous guard option okay, but with a lack of quickness he's not someone you want against a team's most dangerous weapon.

Anyway, back to the big picture: Cassell's commitment is, incredibly, Mark Turgeon's seventh addition in his first year, completing a substantial makeover. Every new coach wants to shape the team in his image, and Turgeon has certainly done that by bringing in such a large foundational class. It's not an ideal situation - half the team will be freshmen next year, after all - but compared to Wake Forest, where Jeff Bzdelik is still trying to get a team of "his guys" in the program, it's infinitely preferable.

The best thing about it all: Maryland now has competent depth and flexibility at every position, 1 through 5. Nightmares about the Dave Neal-Landon Milbourne undersized frontcourt? Maryland has six bigs on the roster, all with good size and a different, useful skillset. Unhappy about playing Nick Faust at point guard? Now there's a wealth of options at the 1, starting with Pe'Shon Howard, moving to youngsters Seth Allen and Cassell Jr., perhaps including even Stoglin, and of course whatever top-tier point guard Mark Turgeon eventually adds next year. Grumbling about playing 6-4 (counting the 'fro) Sean Mosley as a small forward? There's a chance Maryland will be able to pair 6-6 Nick Faust and 6-9 Jake Layman on the wings next season.

So, yeah. I'm a fan of everyone I mentioned, by the way, especially Dave Neal. But while this group may be young, they're deep and adaptable in a way Maryland hasn't been in a decade. All in all, it's a pretty impressive display of roster-building.

As an added bonus, it means Turgeon doesn't have to worry about basics over the next few recruiting cycles. They're already taken care of. Instead, the staff can focus its efforts on a small number of luxury targets - like the Harrison Twins and Rysheed Jordan in 2013 or Dwayne Morgan and Phil Booth (or Theo Pinson, or Isaiah Whitehead) in 2014. Instead of worrying about where the depth is coming from, Turgeon can focus on finishing touches.

Part of the reason for that, of course, is that there really isn't scholarship room to do anything more. (That kinda happens when you have a seven-man class.) Below is the updated Maryland scholarship chart, and as you can see it's relatively full: 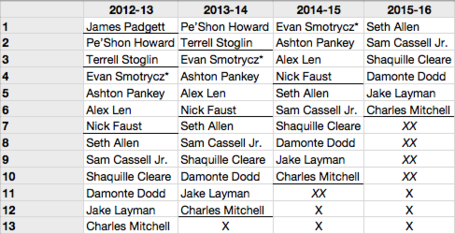 Now, does this mean Maryland will only bring two players in the 2014 class, or only a single guy in the 2013 class? (What about the Harrisons?!) No, of course not. This is assuming no attrition, and that's pretty darn unlikely. Between Ashton Pankey (transfer) and Nick Faust, Alex Len, and Terrell Stoglin (pro) there are at least four guys we can identify right now that are decent shots not to be on the roster in a year's time. And that doesn't include unexpected attrition so common in college basketball - another injury to Pe'Shon Howard, a young freshman getting homesick, or something else we completely don't see coming. Mark Turgeon knows that, and it's why the staff isn't going to limit themselves to going after only one guy.

Still, the roster make-up tells us something about where they'll go in future recruiting. With a whole host of big men now in the program, it's unlikely that they'll look to add another true big man in the 2013 class, like BeeJay Anya or Kennedy Meeks (both of which have more or less stopped considering Maryland, regardless). They'll clearly still pursue a top-flight point guard, like they've been doing for about a year now, but if there's a second piece added you'd think it'd be a wing, preferably one with the size to step into Nick Faust's shoes if need be. With an entire summer of ball still to go, there's plenty of time to find that guy, and I wouldn't hazard a guess on who it is so quickly. But just looking at the roster, you'd think that'd be the logical addition.

A final note here: friends, the class of 2012 is over and done with. Finally. Quite the ride. Here's to another crazy year on the trail.