Dan Hellie isn't exactly the traditional investigative reporter to break these sorts of things, but when he goes public with this sort of bombshell, there's a good chance he's right:

That crashing sound you hear? It's Maryland fans' morale.

I had assumed that Danny would wait it out until at least spring ball, to see if he'd win the job over C.J. Brown or not, but it seems like he's simply decided College Park is no longer the place for him. We should wait until it's official to get too far into it, but it's certainly not a good indicator. I'm not sure if he was fed up with Edsall, Locksley, or the environment as a whole, but the anti-Edsallians will certainly be selling this hard.

Garcia's loss will hurt as well. I always thought he seemed like one of the primary transfer candidates, and that'll leave a substantial hole in the left side of Maryland's line. He wasn't a star offensive lineman, but he was good and would've been a promising and experienced junior next year. It doesn't kill, though: Justin Gilbert is experienced, if injury prone, and should be just fine over there.

The other big question, of course, is why DOB hosted Stefon Diggs on his official visit. I don't really care - it just means the lines of communication broke down somewhere. The bigger question: does that really matter? Sometimes recruits really hit it off with their hosts; other times, the host is just perfunctory. If it's the latter, we should be okay. Heck, maybe Stefon already knew he was transferring and it's a total non-factor. Guess we'll find out on Friday.

As always with a development like this, we'll have time to reflect later, but for now let's look forward. This means CJB is now The Man in College Park, like it or not. I was the first on the CJB bandwagon so I'm presumably much more at ease with this development than most others, but even I recognize that Danny was almost certainly the superior quarterback. That hurts; the media fallout from this will be painful as well, with people painting this as Maryland losing basically the face of their program - and they very nearly are.

But don't fret too much. Mike Locksley has been in this situation before - remember Juice Williams at Illinois? C.J. almost certainly has a better arm than Juice did and I'd wager he's more electric on the run, too; throw in the massive talent at running back, and I wouldn't be at all surprised to see a run-based spread - not entirely dissimilar to the one Gary Crowton wanted to create, oddly enough - be heavily utilized and actually work.

I'm actually more worried about the absurd lack of depth at quarterback. Given CJB's playing style, I think it's a guarantee we'll be seeing a true freshman thrown into spot duty next year. 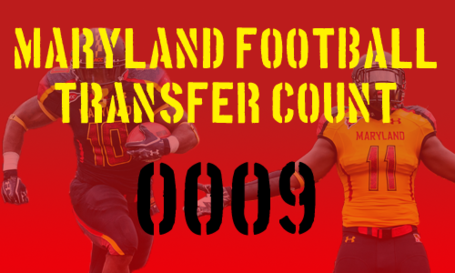