Share All sharing options for: Maryland to wear black version of Pride uniforms against Georgia Tech (and picks up a commitment)

We already knew these were coming, but Maryland and Under Armour went ahead and officially let the cat out of the bag, releasing promo shots of their black Maryland Pride uniforms that the Terrapins will wear tomorrow against Georgia Tech. And yes, they are gorgeous. 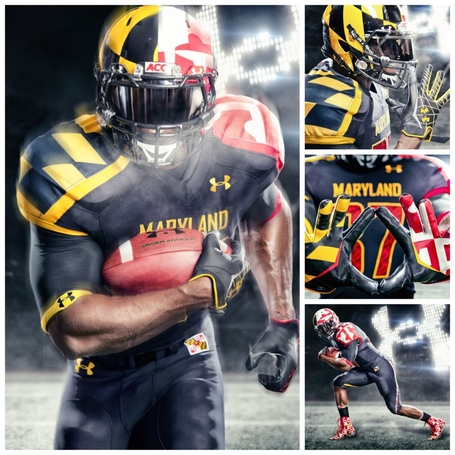 As far as I can tell, they're the same design-wise as last year's duds, except with a black base instead of white. The black base really does work well for this look, because it tones it down a little bit and adds a more intimidating flair to what was a pretty flamboyant look last season. This is still flamboyant, but lacks the court jester vibe last year's look gave off.

Speaking of recruits: Maryland nabbed a new one today, in the form of Wilde Lake offensive tackle Moise Larose, a consensus three-star prospect and Rivals' #25 player in the state, who flipped to Maryland from Rutgers. Maryland needs bodies on its offensive line, and badly. Everyone's hoping that they can make a late run at Na'Ty Rodgers, but he's still likely to go to South Carolina, especially if they finish well and Maryland finishes as we all expect Maryland to finish. Needs must, and Maryland needs more people on their line like whoa.

I don't know of any highlights out there for Larose, but two things: first, at 6-5 and 285, he projects well at tackle instead of an interior line position. Of course, so do Derwin Gray, Jajuan Dulaney, Rodgers, and Damian Prince. I expect Dulaney will be forced inside; it'll be interesting to see where the chips fall in the future. (It could be a non-issue if Rodgers and Prince go elsewhere, as they're expected to.) The second: hey, it's gotta be good nabbing someone from Rutgers, which is currently 7-1 on the year. The local pull is still there, I guess.