Before the game started, mind you, not during it. (Not that that makes it any less awesome.) Still, rather Jordanian of him, wouldn't you say? 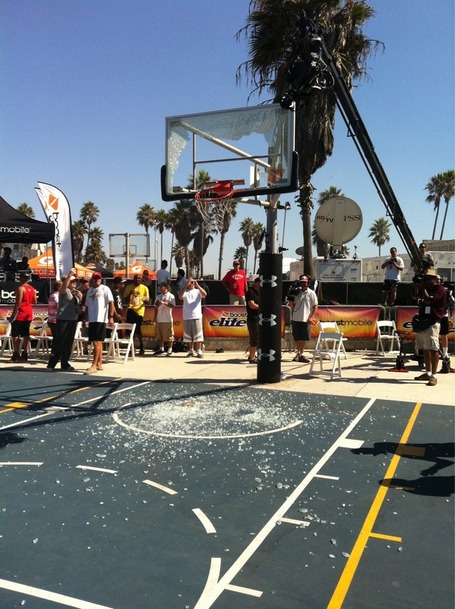 Seriously, "white thunder"? Jeez. Not sure about that nickname.

But nickname be damned: if you're anything like me, you want him to be a Terrapin like ten times as much as you did before. (Not because breaking the backboard is meaningful, but because it's cool.)

And here's some good news to that end: contrary to what appeared to be the case earlier, he will be giving the Terps a second visit, and this time it'll be an official one.

The power forward's schedule doesn't cease after Kentucky. The North Carolina Tar Heels play host to the native of Indiana Sept. 6-7. Once that visit wraps up, he'll navigate 8 miles of Tobacco Road for an official visit to Duke Sept. 8-10. His parents are traveling with him to each school on the visit list.

McGary visited Florida in August and Maryland in June; he plans on taking officials to both.

So, can we make this happen? Paint a rock, or something?