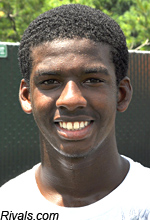 Well, looks like Maryland's built a bit of a pipeline in a certain Pittsburgh high school. Central Catholic already gave Maryland one verbal commitment in QB Perry Hills, and now, according to the Pittsburgh Post-Gazette, his top receiver, Anthony Nixon, will be joining him in College Park.

Nixon stands 6-1, 185, and he's usually listed as an athlete, with the ability to move over to safety or stay at wide-out. He's a three-star on Rivals, two-star (74) on ESPN, and unranked on Scout. He did garner an offer from Pitt back when Greg Gattuso, now Maryland's DL coach, was still there, and listed interest from some moderately large teams like Cincy, Michigan State, Iowa, and West Virginia.

Most of the plays are him as a wide-out, with the final two showcasing him at safety. He doesn't look like he has spectacular speed, but he's dangerous after the catch and tends to run north-south. He did go deep a few times, beating the coverage, but he was just as often utilized on short routes or end-arounds, so he might be more of a possession guy than a true burner. Your guess is as good as mine as to which side of the ball he ends up on; unless Maryland lands Eugene Lewis or Ian Thomas (two highly-regarded WRs they're recruiting), thus forcing his hand, his presence could be used at either spot.

Nixon marks Maryland's 12th commitment for 2012. For those of you wondering, no, sadly there are no five-star studs coming through Central Catholic that I know of.