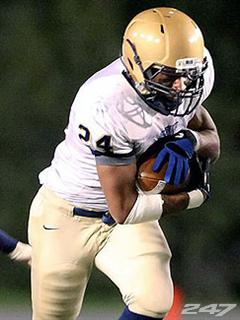 Talk about recruiting momentum. Randy Edsall and Maryland football just landed their third pledge in as many days, and this one is probably the best of the three. Bishop McDevitt (Harrisburg, PA) outside linebacker Brock Dean announced for the Terps today over Temple and Pitt (oddly enough, at a golf course):

"A lot of guys who went through the process all told me once you get on campus you'll just know," said Dean, who had 93 tackles in 16 games as a junior. "All three times I visited Maryland's campus, I knew."

When you read the article, it's clear how seriously Dean took the process - he really knows why he's picking Maryland, and he seems psyched to be a Terp. Always loved to get those guys.

He's a 3-star on Rivals and ESPN, which rates him a 78. He's a bit undersized, but I love his fluidity and athleticism in his highlight tape. He's supposedly been putting on weight since the season ended, and hopefully that won't take away from the finesse side of his game. Not that he's a finesse player purely - he had a couple of seriously punishing hits in there.

Dean comes with a nice bonus: he's supposedly great friends with teammate super-recruit Noah Spence, who is rumored to be high on Maryland. Spence is a five-star DE, the type of guy that transforms a recruiting class. While I haven't seen any indication that they're a package deal - and we certainly know that that stuff doesn't always work anyway - it can't hurt. With a high-level recruitment like that, you take any edge you can get.