The NBA Top 100 camp wrapped up earlier today. I would've posted a recap of the second day and/or posted this earlier, but I was on the road all day, so this was the earliest I could get it done. But better late than never, I suppose, especially when there's a boatload of news to roll through.

To start it off, the camp's biggest winner was probably Amile Jefferson, who led the camp in scoring by a wide margin. What's more, he did it with a dislocated finger. That's a combo of toughness and raw, natural ability that's pretty impressive. Unsurprisingly, Dave Telep thought he was impressive. Of course, he was one of ESPN's standout players from Day Two:

Though his camp team hasn't found the winner's circle, individually, Jefferson's play has been stellar. He has a knack along the baseline for scoring. Jefferson's body is nowhere close to being developed, but his mobility and slinky driver ability allow him to forge entries into the lane. He's a gutty finisher and competitor. The training staff gave him the option of sitting out because of an injured finger, and at his choice, he hasn't so much as missed a single drill.

It's impressive enough for him to play in the games; playing in the drills is even better. Expect him to rise back up a few spots in the rankings, and receive a lot of new interest. If you're wondering, he's still in the "wide open" stage, but he did mention Maryland along with N.C. State.

As for the third leading scorer, as far as total points go? That'd be fellow Maryland target Nate Britt, the 6-3 PG from D.C. who seems to really like Maryland. Britt will be the first real test for Dalonte Hill, as he plays for the D.C. Assault program that Hill is so strongly connected to.

In fact, Northstar's Alex Schwartz was so impressed with Britt that he said he was one of the four most impressive players in the camp, along with fellow Terp targets Jefferson and Mitch McGary. And if you're wondering, you read that correctly: out of roughly the top 100 players in the nation, three of the four most impressive over five games are seriously considering Maryland. That's progress, for sure. Nothing matters if none of them are Terps, of course, but baby steps.

Speaking of McGary, he drew plenty of plaudits once again. Per ESPN:

He is a brute on the basketball court with a nonstop motor that makes him tough to handle. He can put the ball on the floor enough to create a little, is a good rebounder and a solid athlete. McGary is a big-time recruit and will be an immediate impact player for some lucky program. He plays with a high motor and cares about winning . He is blessed with enormous physical size and strength, and from a skill standpoint the big lefty has a soft shooting touch when close to basket and can face up to 15 feet on a consistent basis. On his attempts down low he will create the contact, but the foul will be on the defense. Defensively, his footwork is surprisingly agile as he tries to get around the offensive post players. McGary is a good rebounder who can be a great one when he puts his body on people, and overall he's making a case to move up in the rankings.

Mitch McGary is only averaging 8.3 points a game but that doesn't tell the full story. He's been really good on both ends of the floor. I didn't keep count but he had at least five blocks in the morning game.

And hey, Rivals, too!

Disappointed with his play in an early session loss, McGary came out strong out of the gate in an evening matchup with Robert Carter. He had a series of nifty, yet physical drives, where he finished tough shots and set the tone for his team. The big men in the camp have struggled to set themselves apart offensively, but McGary did just that on Friday night.

Look, you don't need anyone to tell you how good McGary is. He's a stud; it's really pretty simple. The question is, of course, how much of a chance Maryland has at landing him. It's obvious that he's going to be a really tough pull. It won't be any easier now that he's befriended a UNC commitment. But he's still telling people that Maryland is recruiting him the hardest, which means it's actually true and not something he just came up with on the spot. Maryland has as good a chance with him as anyone else does. It's apparent that they're working harder than everyone else, but we'll have to wait and see where that gets them.

If McGary did come to Maryland, his likely frontcourt mate would be Shaquille Cleare, who also impressed Rivals' Jerry Meyer:

Cleare's game is all about strength. He controls space and produces in traffic. A sure-handed rebounder, Cleare is also a great finisher through contact.

Telep had similar comments, calling Cleare "as strong an area rebounder we have" at the camp.

The last link: we have visual verification on Beejay Anya's ridiculous 7-9 wingspan. It is incredible. 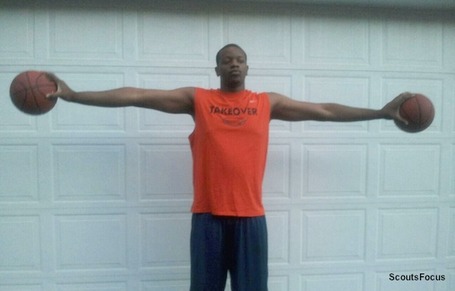 That's all for now. There will be more links coming in through the night, so I'll either update this post or throw up a FanShot. But first, a bonus link: check out a mixtape from Under Armour's Best of the Best Camp in Atlanta from last weekend. Danuel House, Aquille Carr, and Christian Sanders are all featured.

UPDATE: NBE comes in with this late bit about Jerami Grant.

Recently, Syracuse has jumped on him, to which he noted "They contacted me yesterday, Coach (Jim) Boeheim and Coach Red (Autry). And yeah, I'm looking at them". The Orange have offered, along with Georgetown, Notre Dame, Rutgers - all obviously B-EAST schools - along with "UVA, V-Tech, NC State, Maryland." The Terps hosted him unofficially recently.