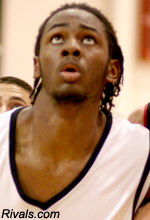 With Jordan Williams on the verge of going pro, Maryland could really use some post help. One guy that might be able to provide it: Robert Goff, a 6-9, 240-pound JuCo center from Hutchinson C.C. Goff was committed to Oklahoma earlier, but Jeff Goodman reported that he's been released from his LOI. IMS followed that up hours later by reporting that Maryland was "moving in on" Goff.

At this stage, you normally take whatever you can get. Given that, Goff would be pretty impressive. He's Rivals' #3 JuCo player nationally. Besides Oklahoma, he had offers from Indiana and Ohio State, which is really impressive. Combine his rankings and offers sheet with his size and Maryland's need for post play and it looks like an obvious pairing.

A lot of people, unfortunately, expect Indiana to make another hard run at Goff, who's been a long time Hoosier fling. But at least one guy says they won't pursue him. That's because of some supposed academic problems that could keep him from qualifying.

That's not a road I'm excited to go down, but considering the relative lack of options, I'm not sure how many other choices Maryland has. If this picks up, we'll have more on it. Until then, watch the YouTube!