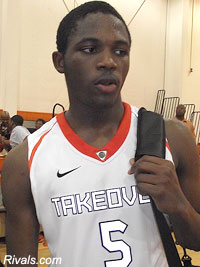 Ah, AAU season is upon us. It's the most sleazy time of the year, sure, but it's also one of the most exciting for basketball fans. Recruits make (see Nick Faust) or break (see Desmond Hubert) their recruitments in AAU season, so it's a recruitnik's wet dream. Ah, the scouting reports.

Anyway, the first event of the season, the Nike EYBL #1 (née Boo Williams), took place over the weekend in Hampton, VA. No coaches were allowed to attend the event, but scouts were in attendance. Quite a few impressions were made down at the Booplex. Justin Anderson did what Justin Anderson does: dunk things, yell demonstratively, and be all-around pretty awesome. But a few players came out and did the unexpected, like local wings Arnaud Adala Moto (over there to the right) and Jerami Grant. And some Baltimoreans even showed well, too.

We'll get to all those guys later past the jump. First, though, the one guy everyone cares the most about:

Justin Anderson. There was a lot to like about Anderson's weekend on his home AAU court, but there were a few mixed reviews.

On the good side, he's improving skill-wise for sure. Rivals picked him out twice as a standout player:

Sure he's a little left hand dominant and might be a little too demonstrative with his emotions at times, but there's no question about whether or not he's going to give big effort. The Maryland commitment looked good draining long threes, attacking the rim and using his energy to impact the game on both ends of the floor. ...

Simply put, Anderson has the physique and athleticism of a NBA player. The question has been will he develop the skill set and feel for the game to realize this potential. On Saturday Anderson took a big step in that direction. He looked comfortable shooting the ball from well beyond the three-point line. He finished with creativity around the rim. And he made shots in the midrange. The proper focus and intensity was there on the defensive end.

In other words: he is, for the most part, who we thought he was, in a good way. Great strength/athleticism, dunks, energy, and solid outside shooting. The second paragraph is more intriguing, as the Rivals folks make it seem like he's improving in terms of skills. If he really does, then we're talking a potential top 30 recruit here.

But don't get too far ahead of yourselves. Jonathan Givony of DraftExpress still has some reservations about that aforementioned skill level, saying he has an average feel and poor shot selection. Dave Telep piggybacks on that, saying that, despite Anderson's strengths, he was settling for outside jumpers way too much. Givony goes on to say that Anderson "can be as good as he wants to be", so long as his skill level improves. Considering his work ethic is supposedly great, he should see plenty of improvement, but keep it in mind.

In case you were wondering, he is still Mr. Clutch. He hit a game-tying 3 to force a 2OT in the NHSI last weekend; now he's dropping game-tying 3s at the end of regulation, too. Afterwards, he yelled "This is my gym!" Welcome to Greivis, Small Forward Edition.

All in all, it wasn't quite a blow-up. He reinforced what we knew what was good about him and didn't do too much to change the negative perceptions. I'd still expect a minor rankings bump if he continues this level. Oh, and there was this. Head > Rim.

Arnaud Adala Moto. Back when Anderson committed, people wrote off Adala Moto, a Cameroonian 6-7 wing who plays for Episcopalian across the Potomac in VA. His own coach said both sides were probably no longer interested in Anderson's commitment. But, uh, if this keeps up, Maryland might want to change their mind.

AAM took his game to another level over the early part of the weekend, drawing rave reviews from scouts. Evan Daniels called him "a beast." Givony said he'll be a future NBA prospect and is a prototypical SF. Rivals' write-up highlighted his complete game:

Few players were as impressive on Friday night as the powerfully built 6-foot-6 wing. Most comfortable using his strength to get into the lane or bowl over opponents in transition, Adalo Moto showed surprisingly soft touch out to the three point line. He rebounds, plays defense and rattled off a list of Virginia Tech, Georgetown, Wake Forest, UNLV, Maryland, Xavier and George Mason.

It'll be interesting to see how Maryland treats him. Unless they take two recruits in the 2011 class (highly unlikely), they'll have three total 'ships in 2012, with one already accounted for by Justin Anderson. One of those scholarships has to go to a big man. The third is a little more flexible; if Adala Moto keeps playing like this, he should be a candidate for it.

This dunk wasn't bad, either.

Jerami Grant. Hey, another local wing! Grant's from DeMatha and many wrote him off after Anderson's commitment, too. But what was said for Adala Moto is true for Grant: Maryland will have the space to take him if they want him. And, just like Adala Moto, maybe they'll want him.

If you listen to the scouts, this was the best weekend of basketball that Grant has played...maybe ever. Telep said he needs to bottle this weekend up and replicate it. He attacked the rim well and finished through contact, which is an important step for a slight guy like him. And it was the most aggressive Eric Bossi's seen him, too. I expect he'll move up the rankings soon.

BeeJay Anya. Kind of a ridiculous name, sure, but Anya's really talented. He's a 2013 big man who'll probably be a high four-star, top-50 type of talent. He did well early this weekend, imposing his will and dominating around the rim. He has a high ceiling and will probably be one of Maryland's top 2013 targets along with the Harrison twins and Chris(t) Thomas.

Nike B-More Elite. Hey, remember Isaiah Miles? The lanky Kevin Durant lookalike from Glenelg Day who was supposed to be really good? Whatever happened to him?

Well, he kind of fell off the radar for awhile there. But look, he's back! Okay, maybe not back, but that's the first time I've heard his name in months. Good to see you again, Isaiah.

Meanwhile, someone named Cameron Williams apparently went HAM for NBE, dropping somewhere between 37 and 46 points in one of the early games. There may not be a lot (read: any) info out there about him, but dude can score. He's supposedly a 2013 recruit from Mt. St. Joseph; keep an eye out for him.

Elsewhere, Sam Cassell Jr. had a good showing (though apparently not in the physical sense, if he actually looks like his dad). He's someone to monitor; right now, he's a high-mid- to low-high-major type, I'm guessing. That could change, though. As this was a Nike-only event, nothing on Aquille Cleare, Daquan Cook, or the rest of the UA Panthers. But hey, not a bad showing for Charm City.