Posting was light over the weekend; sorry about that. I was pretty sick and didn't feel up to creating any analysis-type posts, and basically nothing newsworthy happened, so that explains the lack of posts. We've officially hit the spring doldrums.

But it might be ending soon with any luck: spring football practice starts up for Maryland tomorrow! Normally that's pretty yawn-worthy, but not this year: given the season Maryland basketball just endured, the season Maryland football enjoyed, and the whole Randy Edsall thing, football is a pretty welcome attraction. 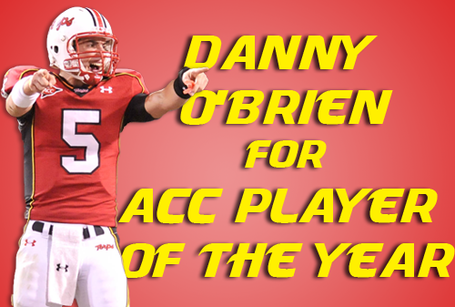 I know the last time I tried this it didn't quite work out. But this one is far more realistic. Hey, he was the conference's best rookie last year, the best QB south of the Mason-Dixon Line, and stands at the helm of a team that won 9 games last season. Both last year's winner (VT's Tyrod Taylor) and his only legitimate competition (N.C. State's Russell Wilson) are gone. Sounds like he has a pretty good chance to me. Seriously, completely non-jokingly, he has to be a front-runner for this, right along with Montel Harris. Right?

I'll be right about one of these eventually, mark my words.

As for content: over the next few weeks, there'll be the normal news-plus-commentary posts when stuff pops up (academic problems, injuries, unforeseen position battles, etc) as well as some analysis stuff on position battles and things to watch during spring ball.