This may not be the six-man monster that was last year's class, but there's still plenty of intrigue and interest in Maryland's incoming freshmen. If you don't follow recruiting, though, these names aren't much more to you than that: just names. Over the past three days, we fleshed out your knowledge of Maryland's three freshmen with template-tastic profiles. We already previewed the German sensation Martin Breunig and the gritty combo guard Sterling Gibbs. Now, the jewel of the class, Baltimore's finest, Nick Faust. 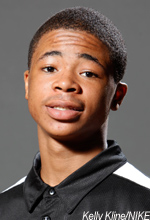 on Scout, #13 SG, #47 overall
Strengths: Faust gained his initial reputation on the circuit as a pure shooter, but he's since fleshed out his game to become an elite scorer who now possesses a variety of ways to put the ball in the basket. Even better, he possesses a ruthless scorer's disposition. His biggest strength is probably still his outside shot, which has a slightly unorthodox stroke but is very effective. He has NBA range and has been mentioned in the same class as some of the most dangerous long-range shooters in the country. Now, though, he can take his man off the dribble, get to the rim, and finish, or sometimes even find a midrange game. His length is top-notch; it allows him to play the 2 or the 3 and guarantees that he'll be able to get his shot off against all but the tallest of defenders. Dave Telep said he had "sly athleticism" and most seem to agree; he won't wow you with crazy dunks or obvious hops, but he can get up and/or use his speed and quickness to beat people off the dribble. His ballhandling is adequate and improved as the circuit went on and he became a bigger name. Defensively, he has the tools to be a real problem with that length and athleticism. By all accounts he's a hard worker with a great basketball IQ; ESPN even mentioned he could play PG if he had to.

Weaknesses: His biggest problem is that he's wiry thin, and that will allow bigger, stronger players to muscle him and bother him on both ends of the floor early on. I expect he'll get bigger and stronger after a summer with Paul Ricci (the reverse Jordan Williams Effect) and that won't be a long-term problem, but it is something that needs addressing. Despite his top-notch scoring ability, he was up-and-down his senior year with a target on his back. That won't be a problem in the ACC, of course, and it was the first time he was dealing with his newfound fame, but it prevented his star from rising as high as it could've and raises some questions about his consistency. He's still a spot-up shooter at heart, and that could lead to problems early on if his shot isn't falling, which it sometimes isn't. He could also do with a bit more fleshing out of his mid-range game, which is still a relatively recent addition to his arsenal.
In a Turtleshell: Faust is a premier, big-time scorer with a confident attitude, great length, and a deadly shot. He's a bit on the thin side and still needs to get more consistent with most parts of his game, but his scoring ability is uncanny and gives him an extremely high ceiling.
Interesting Storyline: Faust is the second time in three years that Maryland's landed the best player out of Baltimore, hands down. If there's a debate about Maryland's ability to successfully recruit Charm City, it should be over. The problem that still remains is that guys like the Bartons or Josh Selby are national recruits, and the hometown factor doesn't always play a role. Faust is hopefully bridging the gap between national recruits like those and the more local recruits ranked in the mid-40s to mid-60s.
Comparison: Faust is a unique talent for which it's kind of difficult to find a great comparison - both Stephen Curry and John Jenkins have been floated out there, but they don't work for a variety of reasons - but is it sacrilege to say that his game kind of reminds me of Terrence Ross'? Similar size, similar build, similar shooting and scoring ability...just sayin'. Ross was a bit more athletic and Faust is a bit more advanced offensively, but frankly, they're kinda similar. ... Or, y'know what, no, Jenkins works. Let's go with that.
Prediction: Like most freshmen, it's tough to figure out how much Faust is going to contribute out of the gate. On one hand, his scoring ability is top-notch and his outside shot is really, really needed. On the other hand, his body isn't quite ACC-ready and Maryland isn't exactly lacking a dynamic perimeter scorer (Terrell Stoglin, anyone?). He'll get serious minutes as a zone-buster, I'm guessing, and because he has elite skills right now, he won't suffer the fate of the bench-ridden Mychal Parker. I still see almost no chance he starts early on, though, and his lack of dominance at City is a good indication that he probably won't average double-digits his freshman year. (I know Stoglin did it, but who else would score for Maryland if not him? Not the same scenario.) Regardless, Faust has a very bright future. Most people seem to consider him a three-year starter, and that sounds about right, though 2.5 (or 1.5, depending on how well he performs) is probably more accurate. His scoring ability is explosive and is something that Maryland hasn't seen from the perimeter in a long time. As long as he adapts to the college game - not a guarantee, remember - he should be challenging for All-ACC honors by his junior year, if not earlier.
Other Useful Links: Rivals | ESPN | Scout | Bracken's Commitment Story | All 80 Posts We've Written About Faust | Watch Faust Commit Again! | Faust at IS8