This may not be the six-man monster that was last year's class, but there's still plenty of intrigue and interest in Maryland's incoming freshmen. If you don't follow recruiting, though, these names aren't much more to you than that: just names. Over the next three days, we'll flesh out your knowledge of Maryland's three freshmen with template-tastic profiles. Make sure to check out Martin Breunig's as well. 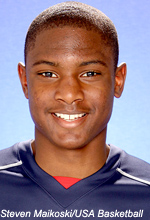 on Scout, #29 PG
Strengths: Sterling has fantastic bloodlines, as he's the younger brother of Pitt's all-everything point guard, Ashton Gibbs. Some have called him a "carbon copy" of Ashton, but I'm not sure I buy that. He used to be a pure scorer, but he's adapted very well to the point guard spot, which gives him (and Maryland) some versatility. He has great floor vision and is very poised. He's a natural scorer; he can hit open shots, finish at the hoop, or get to the line. He loves to penetrate and either finish or get fouled, while he's a pretty good FT shooter (thank God). He has a nice-looking shot and supposedly pretty good range so long as he gets a clean look at the basket. His biggest strength, though, is that stereotypical "NYC toughness." He's a scrappy fighter, someone who never gives up and would be at home in the Big East. Case in point: he consistently played a year up on the AAU circuit.

Weaknesses: While he has good strength, his height is kind of limiting, especially if he's going to play with Pe'Shon Howard or Terrell Stoglin at the same time. He's not tall enough to be a true combo guard, even though that's his true game. If he was going to play the point next to Faust at the 2, it'll work. But with other short guys like Pe' and Stogs, is there going to be a problem defensively? His PG play can be spotty, too, even though it's improving - remember, he hasn't always been a true/pure point. He sometimes gets too dialed in to finding his own shot on offense. Much like Terrell Stoglin, he's not an amazing athlete; his savvy makes up for it, though, and I don't expect that to be a limiting factor in the ACC. This isn't really a weakness, but he's more solid than spectacular when it comes to scoring: he won't give you 40-point onslaughts full of dunks and long-range threes, but I'll just as soon take a 20-point game with 7 FTs and a couple of fastbreak layups.
In a Turtleshell: A short combo guard who's becoming a full-time PG, Gibbs is hard-nosed and a surprisingly solid, prolific scorer, but minutes may be hard to come by early on.
Interesting Storyline: There are two interesting things about Gibbs, though neither of them are "storylines" per se. First, he's the brother of Pitt guard Ashton Gibbs, as mentioned above. Second, the last Terp from his high school: Alex Wujciak, who already gave his opinion on the guard.
Comparison: I keep going back to Adrian Bowie with a jump-shot and better point guard instincts. Like Bowie, he's quick, likes to penetrate, and is tough on defense despite being around 6-1. He has a better jumper, though, and may be more at home playing the point than Bowie.
Prediction: There's no reason Gibbs can't be an effective ACC starter before too long. His height isn't ideal, but plenty of players have overcome that. If Bowie can do it (if only for stretches at a time), there's no reason Gibbs can't, either. Offensively and defensively, he's a rather complete player. Early on, though, I don't know where the minutes are going to come from: one of Pe'Shon Howard or Terrell Stoglin will almost always be on the floor, and putting Gibbs out there at the same time gives Maryland a lineup short on both height and experience. In time, though, I get the vibe that Gibbs has a very high ceiling.
Other Useful Links: Rivals | ESPN | Scout | Bracken's Commitment Story | Team USA Profile | Sterling's Twitter | Local Paper Profile | Team USA Interview