This may not be the six-man monster that was last year's class, but there's still plenty of intrigue and interest in Maryland's incoming freshmen. If you don't follow recruiting, though, these names aren't much more to you than that: just names. Over the next three days, we'll flesh out your knowledge of Maryland's three freshmen with template-tastic profiles. First up, the German-born Martin Breunig. 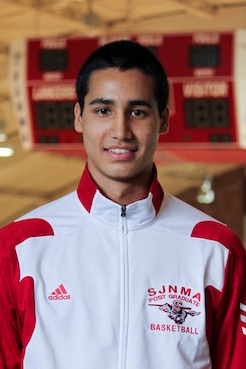 on ESPN, grade of 87; NR on Scout
Maryland Was Better Than: Green Bay, Maine, San Francisco, St. Louis, UAB (interest from Marquette, Cincinnati)
Strengths: His biggest asset is his natural size, strength, and athleticism. He has a good frame to add size - even if that 205 number is correct, he looks and plays like he's bigger. His height is elite, especially with his handles and face-up game, which have the potential to make him a Singler-esque matchup problem. He's a surprising athlete, too; he runs the floor very well and can get up high, as his dunks show. He has almost every skill you could ask for, too. His stroke looks pure and most reports credit him with a strong mid-range game and even the ability to hit the odd three-pointer. For his size, his handle is excellent - he's good enough on the bounce to lead a fast break, or face up and take his man off the dribble. He loves to dunk and will do it often, but he has quite a few options offensively. By all accounts he's a hard-working, smart kid. Has a European-style game with strong fundamentals, which should appeal to Gary.

Weaknesses: He's seriously caught in-between positions, straddling the 3 (which is his style) and the 4 (which is his body). Even though he has a good frame, he can get overpowered down low. That might have some to do with his physicality or some to do with his assertiveness; who knows, maybe it's both. There are almost no videos showcasing legitimate post moves, so I'm guessing they're still developing. While his highlight videos make it seem like he faces decent size, his competition may be questionable. He's only been in the States for about 6 months, so his transition to a more athletic, more physical game may take longer than most, even with his above-average physical tools. The biggest scare, at least to me: if his videos look awesome, if he showcases an above-average shot, if he has top-level tools and skills, why isn't there a bigger deal being made about him?ESPN gave him a two-star rating, but even their weaknesses seem nit-picky. Maybe this is a case of being too good to be true.
In a Turtleshell: A combo forward, more at home on the outside, with a very high ceiling thanks to his superior size, skill, and athleticism, but his adjustment period may be longer than most.
Interesting Storyline: Uh, he's German. Is that not enough? His commitment makes Maryland a sort of World Market of ballers, with recent players from Venezuela (Greivis Vasquez), South Korea (Jin-Soo Choi/Kim), Iceland (Haukur Palsson), the Netherlands (Berend Weijs), and now Germany. If you go way back, you can count Sarunas and Lithuania.
Comparison: I try to think of any comparison but this one, but the only thing I can see here is Kyle Singler. Is that to say he'll be as good as Singler? No, and he probably won't be. But in terms of style of play, Breunig has the same shot and propensity to play on the perimeter, which creates that same matchup problem.
Prediction: I'm terribly torn here. On one hand, I see someone with top-flight size, athleticism, and skills. Seriously, there's nothing I need to see out of Breunig that I haven't seen yet outside of post moves, but I consider him more of a three-playing-the-four at this point anyway. On the other hand, I see minimal offers, low rankings from the scouting services, and a relative newcomer to the American game. Even if he ends up getting Palsson-minutes his freshman year, I'm expecting a pretty high trajectory for him. There's just so much there. If he can develop his body and post moves, he'll be a legitimate ACC starter at the 4 before too long.
Useful Links: Rivals | ESPN | Scout | SJNMA Profile | Orange Express Scouting Report | Bracken's Commitment Story | Local Paper Profile