Well, I would have liked Maryland to have put State away early so we could rest our starter more, but a win is a win and we're still alive, so I guess we can't complain, right? 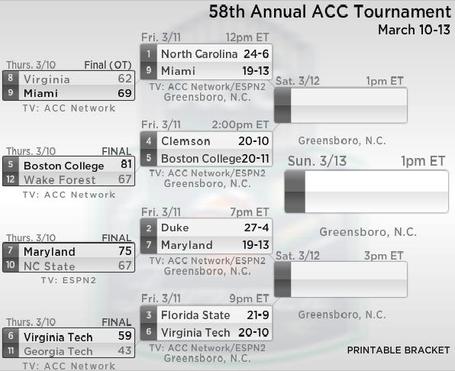 UNC-Miami tips off at noon and is followed by an intriguing match-up between Clemson and BC. Miami gave UNC a hard time in their last meeting and the Heels only won by 3, so don't think a Miami upset is out of the question, even if that previous game was in Miami. If Maryland has any hope of winning the ACC tournament, I think having to play UNC needs to not be part of the equation.

The Terps tip off the evening session with a match up against Duke, whom they'll be facing for the 3rd time this season. Maryland showed flashes of the team that got our hopes up several times this season, but still managed to turn the ball over 15 times. Cut down on the TOs and we might have a shot against Duke. One good thing about last night's game is that only only starter played more than 30 minutes and that was Jordan Williams, who logged a team-high 36. If he can bring the energy again tonight, our players weren't that exerted otherwise yesterday, so hopefully the adrenaline can carry them through this game.

IF the Terps were to get past Duke tonight, they'd be looking at a match up between either FSU or Virginia Tech. I think we'd have a pretty good chance against either of those teams, but especially Virginia Tech because they too would have played the previous two days, so Maryland would be on the same page in terms of that.

But, as they say, one game at a time. So, let's get the conversation going now for the two games preceding ours.  Who do you all like today?