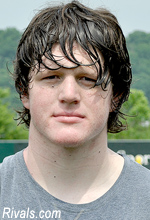 Everyone says Randy Edsall's term at Maryland will depend on his recruiting, right? Well, if the start is any indication, we might have a winner on our hands. Per the fine folks over at IMS, Edsall and Maryland just landed their first commitment of 2012: Good Counsel OT Mike Madaras.

More links will be added when they're found (and without a paywall). Madaras is a big get for a few reasons. First off, take a gander at his offer list: some of the most prominent schools are Georgia Tech, Michigan, Mississippi State, Pitt, South Carolina, Stanford, Virginia Tech, West Virginia, and Wisconsin. Pretty impressive sheet right there, enough to win me over for sure.

Madaras is a talent. He's one of the area's most highly-touted offensive linemen, with a great frame and some surprising agility. Oh, and he's only 16 (that's a year young) meaning he has a higher ceiling and a lot more room to grow.

Just as importantly (maybe more importantly), this is a message of sorts for Maryland's coaching staff. Madaras isn't at the level of the Kouandjios or Stefon Diggs, but he's still significant. For one, he's a hotly-recruited local recruit (Josh Barr had him at #7 in the area), which is a type of player Maryland's had trouble landing in the past. He's also from GC, a school that continually puts out talent but from which Maryland hasn't landed a player since Caleb Porzel three years ago.

Even more striking, Maryland rarely lands players of this caliber this early. When they do pick up early commitments (like Titus Till or Kevin Dorsey), they're usually under-the-radar. Getting off to a fast start on a player that a lot of teams have been in on? That's pretty important, and a good omen for things to come.

(Oh, and let's not forget about his ridiculously good teammates, Wes Brown and Stefon Diggs. Want to bring those guys with you, too, Mike?)

There are levels of recruiting. There are local pipe dreams, and then there are solid local recruits. Maryland will rarely be a destination for the first kind. All too often, though, they missed the ones in that second category. Madaras, a high-three star/low-four star type of guy, falls into the second one, and that's where Edsall's success or failure will be made. So far, so good.