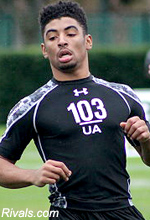 Here's a nice little surprise ending to the 2011 football recruiting class: it looks like Terrapin Times (by way of Terrapin Station) is reporting a commitment out of North Carolina RB Justus Pickett. The story is stuck behind a paywall, but the picture is of Pickett and it says a 2011 recruit committed, so...you do the math.

Pickett's 40 time on Scout checks in at an unbelievable 4.32 (by which I mean I really don't believe that his time). Still, even if that's embellished, there's no doubt he's fast, and the highlights (embedded below) show as much. Caleb Porzel filled the speedster role for Maryland awhile back, but he's transferred now, and with Da'Rel Scott gone, too, Maryland's lacking a dynamic home run threat. The hope is that Pickett would provide that, and his speed certainly seems to indicate that it would.

Oh, and here's some even better news: he was pretty hotly-recruited, with offers Arkansas, WVU, and South Carolina, among a few others. Considering how late in the game this is, it's a very nice pickup for a staff that got a late start on things.

(Bonus: his hair [alternate styling] is instantly among the best of the team.)